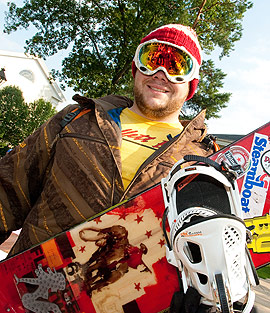 Like sports? Join the club. Plenty to choose from.

The Canoe Club has taken two trips a year since 1997, and we’re open to anyone with an interest—no skills required. (But be ready for an adventure.) In the fall, we head to North Carolina to compete in a triathlon. Yep, that’s a five-kilometer run, a one-mile swim, and a ten-mile canoe. And in the spring, we usually go whitewater rafting. We also volunteer regularly to clean up the banks of the Kalamazoo River throughout the city of Albion.

We promote school spirit, performing at varsity games and generally encouraging good sportsmanship on campus. The Albion College Cheer Team (ACC) is a club sport organization open to both men and women who want to support varsity athletic teams at Albion (and have a great time).

Interested in horses? Then you're in. The Albion College Equestrian Club is an organization open to the entire campus community, so you don't have to own a horse or even ride. Our group has two facets: a recreational club for members who don't wish to compete at the intercollegiate level, and three equestrian teams that compete in hunt seat, western, and dressage. One of the functions of the Club is to help fund the western and dressage teams, which are both considered club sports.

Want to play against other local clubs, colleges, and universities? Hockey Club is where it happens. We’re a group of Albion College students who come together for love of the sport, and we regularly compete.

Looking for intramural instead of rec sports? Albion has a wide range—everything from basketball to dodgeball to canoeing to Ultimate Frisbee. Find intramural sports here.

We’re focused on making skiing and snowboarding affordable. We also have a great time together on the slopes. Visit our website