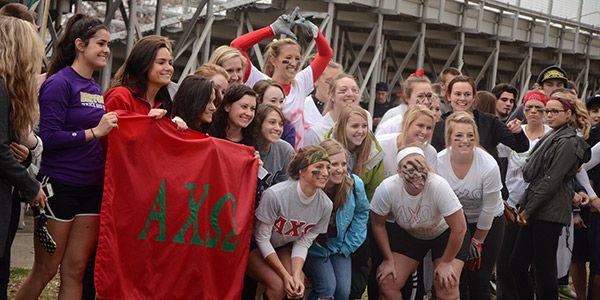 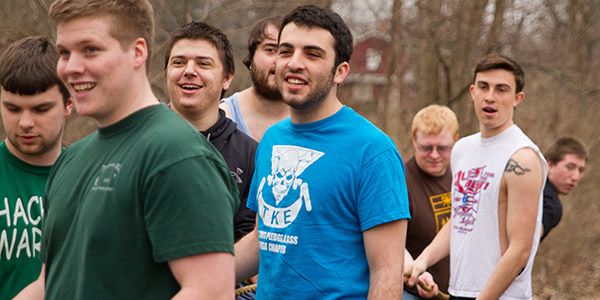 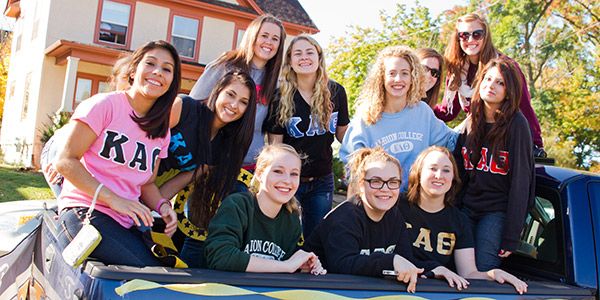 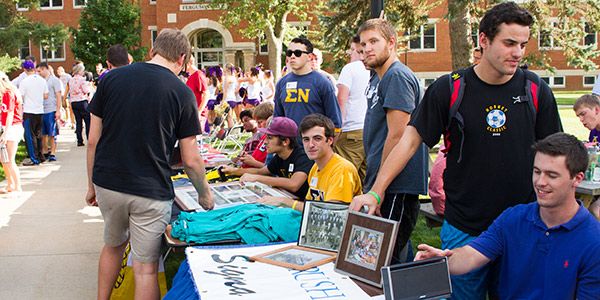 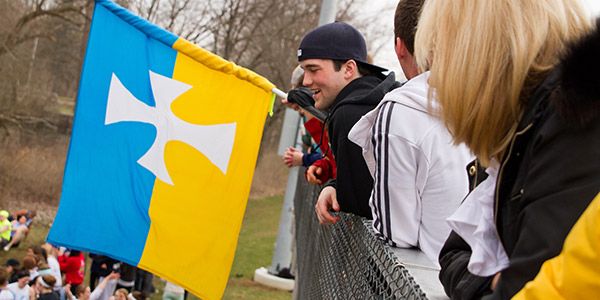 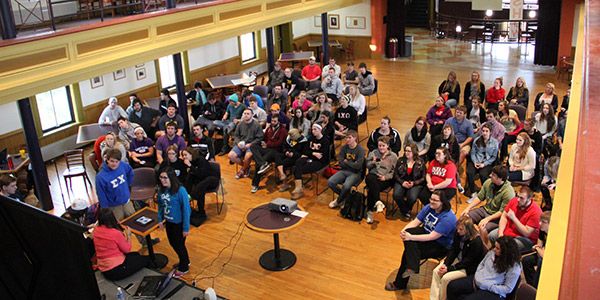 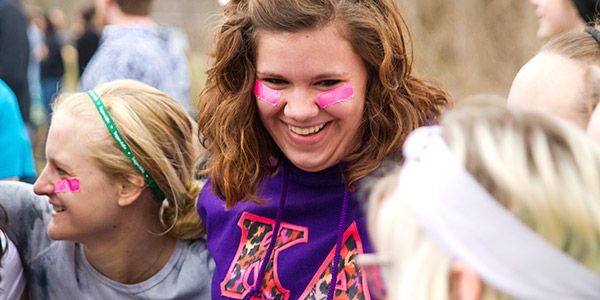 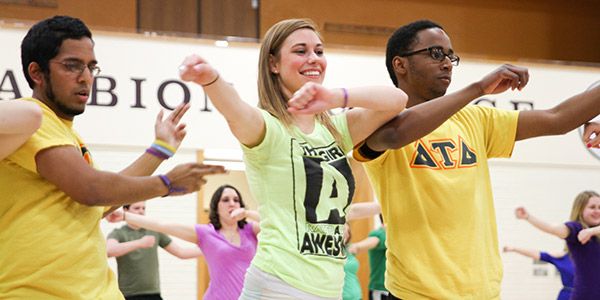 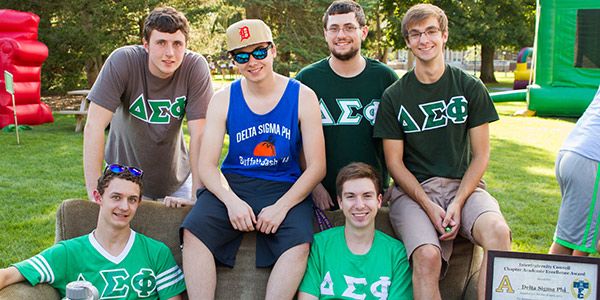 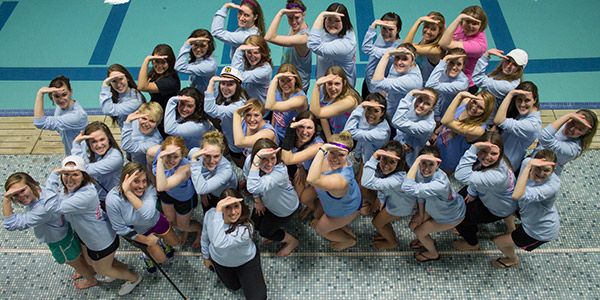 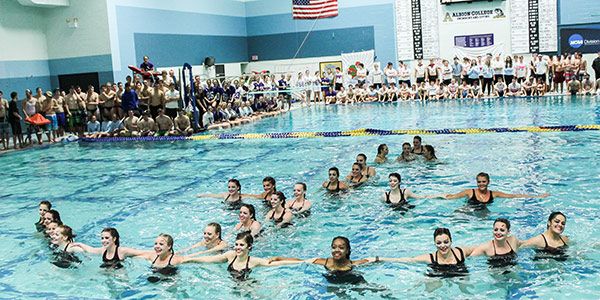 Join a tradition at Albion of more than 130 years.

Each chapter offers student leadership roles, service opportunities, and academic support in a close-knit environment. Greek students can be found all over campus, involved in almost every student organization and athletic team. Here are some of the details of what it means to be Greek at Albion.

The on-campus advisor for the sororities is the Assistant Director for Greek Life and Student Organizations, Kristen Sarniak. If you would like to contact Kristen, you can reach her at or 517-629-0433. Each sorority has a lodge in which they hold meetings and various events, but sorority womem do not live in these lodges. Instead, they live all across campus in residence halls. This gives members the opportunity to make meaningful connections with non-affiliated folks on campus, women in other sororities, and be directly immersed in campus life. For any questions regarding on-campus living arrangements, please contact the Albion College Office of Residential Life.

Alpha Chi Omega was founded on October 15, 1885, at DePauw University, with the purpose “to provide the advancement of the intellectual, social and moral culture of its members.” Its official mission statement reads, “Alpha Chi Omega is a national women’s organization that enriches the lives of members through lifetime opportunities for friendship, leadership, learning and service.” Its philanthropies focus on domestic violence awareness and the MacDowell Colony, the oldest artists’ colony in the United States, located in Peterborough, New Hampshire. Alpha Chi Omega is a member of the National Panhellenic Conference.

In 1908, at Howard University, Alpha Kappa Alpha became the first historically black sorority founded in this county. The purpose of the Sigma Zeta Chapter and of the national sorority is to cultivate and encourage high scholastic and ethical standards, to promote unity and friendship among college women, to study and help alleviate problems concerning girls and women in order to improve their social stature, to maintain a progressive interest in college life, and to be of service to all mankind. Alpha Kappa Alpha, Inc., is a member of the National Pan-Hellenic Council, Inc.

Delta Gamma was founded in 1873 at the Lewis School for Girls. The organization’s primary purpose “is to create an environment for our members in which lasting friendships and our vows of sisterhood emanate all aspect of our Fraternity. We encourage an atmosphere which will foster high ideals of friendship among college women, promote their educational and cultural interests, create in them a true sense of social responsibility and develop in them the best qualities of character.” Philanthropically, Delta Gamma’s goal is to “stop blindness before it starts”; money raised by chapters has funded genetic research, Braille books, and so forth. Anchor Splash is an activity hosted by the Zeta Chapter of Delta Gamma to raise funds for this cause. Delta Gamma is a member of the National Panhellenic Conference.

In 1897, Kappa Delta was founded at State Female Normal School (now Longwood University). Its stated purpose is “to promote true friendship among the college girls of our country by inculcating into their hearts and lives those principles of truth, of honor, of duty, without which there can be no true friendship.” Kappa Delta’s national philanthropies are Girl Scouts of the USA, Prevent Child Abuse America, Children’s Hospital (in Richmond, Virginia), and Orthopaedic Research Awards. It is also a member of the National Panhellenic Conference.

The on-campus advisor for the sororities is the Assistant Director for Greek Life and Student Organizations, Kristen Sarniak. If you would like to contact Kristen, you can reach her at or 517-629-0433. Each fraternity has a house that is considered "on-campus housing." Since the houses are on campus, they are run by the Albion College Office of Residential Life.

Founded in 1865 at the Virginia Military Institute, Alpha Tau Omega was the first fraternity established as a national organization, not as a local group. It was also the first fraternity founded after the Civil War. Its creed reads in part: “To bind men together in a brotherhood based upon eternal and immutable principles.” Nicknames for its members include Taus, Alpha Taus, and ATOs. Alpha Tau Omega is a member of the North-American Interfraternity Conference.

Delta Sigma Phi was founded in 1899 at City College of New York. The fraternity’s stated purpose is “to fulfill the desire of serious young college men for a fellowship and brotherhood, as near a practical working ideal as possible, not fettered with too many traditional prejudices and artificial standards of membership, by a clean, pure, and honorable chapter home life.” Delta Sigma Phi’s core values are culture, harmony, and friendship, and it has a philanthropic partnership with the March of Dimes. It is also a member of the North-American Interfraternity Conference.

Sigma Chi was founded in 1855 at Miami University. Its core values are friendship, justice, and learning. The famous song “The Sweetheart of Sigma Chi,” was composed by two Albion College Alpha Pi alumni in 1911 and is the best-known of all fraternity songs. Sigma Chi’s philanthropies are Children’s Miracle Network and Huntsman Cancer Institute; the organization is a member of the North-American Interfraternity Conference.

Sigma Nu, founded in 1869 at Virginia Military Institute, is a member of the North-American Interfraternity Conference. Its mission reads: “To develop ethical leaders inspired by the principles of Love, Honor and Truth. To foster the personal growth of each man’s mind, heart and character. To perpetuate lifelong friendships and commitment to the Fraternity.”

Founded in 1899 at Illinois Wesleyan University, Tau Kappa Epsilon is the largest social fraternity in the world, with 272 chapters internationally and approximately 250,000 active members and alumni. The organization’s philanthropies are St. Jude Children’s Research Hospital and the Alzheimer’s Association. Tau Kappa Epsilon is a member of the North-American Interfraternity Conference.

The six fraternities on campus are all members of the North-American Interfraternity Conference and make up Albion College's InterFraternity Council (IFC). IFC governs and coordinates the activities of the fraternal chapters on campus.

For more information on these councils please contact the Assistant Director for Greek Life and Student Organizations or email .

Gamma Sigma Alpha is a national academic Greek honor society that recognizes social fraternity and sorority juniors and seniors whom have a 3.5 cumulative grade point average or higher.

Order of Omega is a national leadership honorary for sorority and fraternity members who have made significant contributions to the Greek community, to Albion College, and to the greater Albion community. Its mission is to unite leaders within the Greek system for a common good. Order of Omega promotes continuing leadership and responsibility for those Greeks involved.