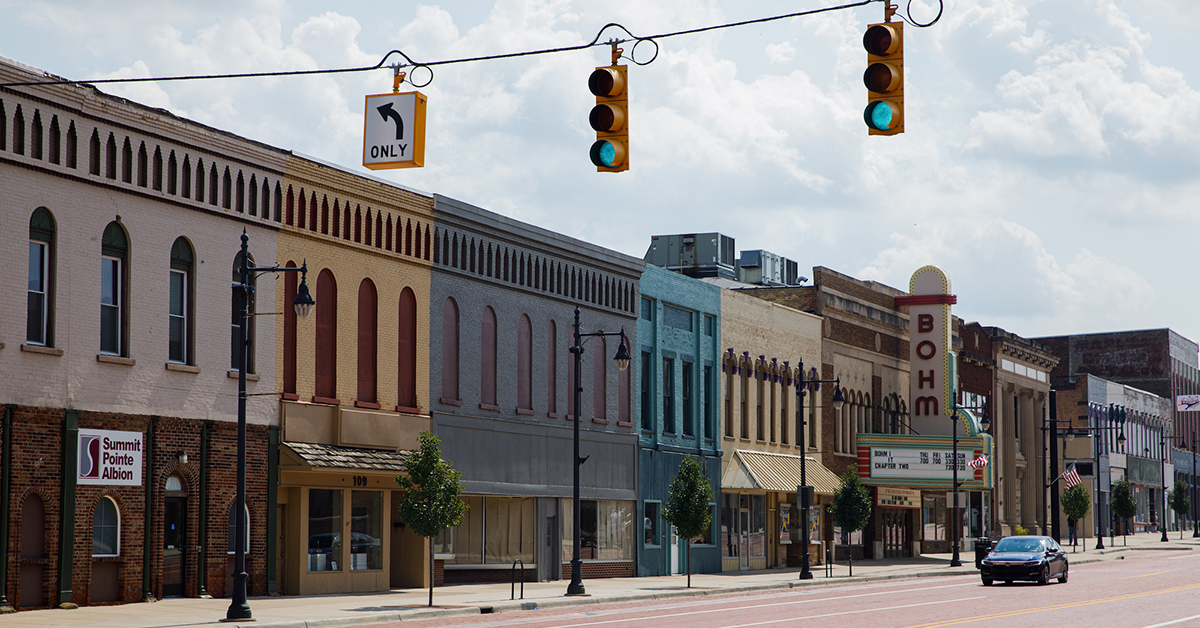 What we can’t do is stay stagnant because the world is ever-changing,” said Clarence Stirgus, ’12, Albion College’s assistant director for global diversity and Build Albion Fellows coordinator. “If we stay stagnant then we aren’t providing the students with what they need to succeed at Albion.”

Since its introduction in the fall of 2014, the signature Albion College program has provided significant opportunities for local students interested in pursuing a liberal arts education while serving their community to do just that.

But, over and above the natural change that occurs over time, the 10 students in the newest Build Albion Fellows class, as well as the 26 current Fellows from the previous three classes, are dealing with the COVID-19 pandemic that has made face-to-face interaction—a cornerstone of community involvement—nearly impossible.

“I’ve literally only seen them in person for two days this summer for a total of an hour and a half to two hours,” Stirgus said. “Normally by this point we’ve spent weeks together. But we have met virtually a number of times and they’re getting to know me and I’m getting to know them.”

To be eligible for the Build Albion Fellows program, students need to live in the Albion area or former Albion Public Schools district and, after being admitted to Albion College, demonstrate high financial need based on the Free Application for Federal Student Aid (FAFSA) as well as a commitment to service in the local community. Those admitted will receive four-year tuition, housing and meals; in return, the Fellows will engage in service projects year-round that help the community.

Normally, summer projects begin much earlier, but it was only a week ago when the Fellows were able to safely hold their first event, connecting with local kids in a Battle Creek YMCA-sponsored event in Albion.

“It was a chance to get kids out and keep them occupied,” Stirgus said. “It’s a very different time, but I believe we’ve made amazing strides.”

Here is the Build Albion Fellows Class of 2024:

Maddie Davis: A native of Albion and a 2020 graduate of Concord High, Maddie has been interested in attending Albion for years. She participated in band, softball, theatre and was a member of the National Honor Society. She plans to major in elementary special education and wants to play in the College’s British Eighth marching band.

Ariana deJesus: A 2020 graduate of the Marshall Academy, Ariana was drawn to Albion College because it wasn’t too big so she wouldn’t feel overwhelmed and it wasn’t too small to pursue big possibilities. Her interests include mastering new recipes and traveling. She plans to major in biology and pursue a career in nursing.

Devin Easterwood: A 2020 graduate of Concord High, Devin’s interests run toward robotics and aerial photography. He plans to major in pre-engineering and hopes to get the campus and the community involved in events from a Lego building day to photography contests. And he’ll be the one riding a Segway around town.

Carlettus Glaspie: An Albion native, Carlettus is a 2020 graduate of Concord High who is undecided about his major at Albion. His goal at school is to play football for the Britons and work with community youth to help them get where they need to be. A fun fact? He solved a Rubik’s Cube.

Anisa Gonzalez: An Albion native and a 2020 graduate of Marshall High, Anisa enjoys theatre productions, painting and spending time with her family. She chose Albion because it is close to her family. She plans to major in psychology and has set her sights on pursuing a doctorate.

Madelyn Leva: An Albion native, Madelyn is a 2020 graduate of the Marshall Opportunity School; her hobbies include listening to music and pursuing new adventures. She also has a love of science. It has long been her dream to attend Albion College and she hopes to use that education to help her community.

Cedrianna March: Cedrianna is a 2020 graduate of Marshall High and an Albion resident whose hobbies include cooking and hair styling. Her academic interests at Albion include business and computers, and she plans to attain a secondary education certification that will allow her to give back to the Albion community.

Caitlyn Robbins: A 2020 graduate of Olivet High, Caitlyn is planning to pursue a business degree at Albion. The Fellows program intrigued her because of the opportunity to help others. Her interests are playing soccer and reading, and Albion interested her because it is close to her family.

Malena Solis: An Albion native and a 2020 graduate of Marshall High, Malena was a member of the National Honors Society and Big Brothers Big Sisters of America. She has a love of travel and has already visited such countries as Italy, Greece, Mexico, Lebanon and Germany. She also plans to play golf for the Britons.

Sarah Starkey: A 2020 graduate of Parma Western High, Sarah is planning to major in health with a focus on nursing. Her interests are her involvement in her church and spending time outdoors, where she specifically loves to check out new hiking trails. As a Fellow she hopes to use technology to tutor younger kids.