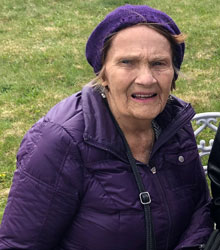 Liz Fraser devoted herself to a number of College, community and statewide initiatives, ranging from the county Humane Society and regularly donating blood to the Red Cross to helping establish the College's recycling program and encouraging a smoking ban in the residence halls.

Liz's passion for Albion stretched over seven decades and extended beyond athletics to academic and artistic activities. A fixture at sporting events, concerts and theatre performances for some 66 years, Liz also took an active interest in students who received scholarships established in memory of her husband and grandson (Steven Gilbert, '93). In 2020, 16 years after Morley's death, she was still a well-known figure on campus.

"Liz was so witty and had an enormous heart," says Sunny Kim, '20, a Morley Fraser Leadership Award recipient. "Her legacy is evident, and I will always be touched and honored that I had her friendship, and can feel her spirit everywhere."

Morley and Liz Fraser arrived in Albion in 1954 after Morley was offered the head football coaching job at the College. In 15 seasons, from 1954-68, Fraser's teams posted an 80-41-1 record while winning six Michigan Intercollegiate Athletic Association championships. At the same time, he led the Albion baseball team to seven conference titles through the 1972 season.

Liz was legendary for the relationships she maintained, over decades, with dozens of Morley's former athletes.

“To many of us, she was like a second mother," says Duncan Beagle, '70, a judge serving on Michigan's 7th Judicial Circuit Court and a pitcher on Fraser's baseball team. Beagle notes that the Frasers drove to Flint to witness his swearing-in as a judge; he also saw Liz at Flint High School football games when her sons, both coaches, brought their teams to play.

Beagle recalls a 2018 reunion he and several teammates enjoyed with Liz, with all telling stories of the legendary coach.

"Morley was definitely a personality," he says. "But after we left Albion, we began to appreciate how much more there was to Liz than being 'Coach's wife.' She was a very special lady."

"She was slowing down and she knew it, but nothing dampened her spirit or commitment," says Peg Mitchell Turner, '69, recalling that Liz climbed the bleachers to watch Briton basketball games during the winter of 2020.

"She was a 'clipper' and whenever she cleaned out a drawer, I'd get an envelope in the mail—there would be a 20-year-old article Liz thought we would like," Turner says. "When Jessie Longhurst ('06) had her accident, Liz reached out to the family, because she understood losing a child in that way. She also supported Jessie's Gift (an endowed fund established at the College). Her arms extended to everyone."

Beyond the College, Liz devoted herself to a number of local and statewide initiatives. She lobbied for the prohibition of mourning dove hunting in Michigan, and raised funds for the Calhoun County Humane Society. She encouraged the College to ban smoking in the residence halls, helped establish Albion's recycling program, and was a 20-year volunteer and 20-gallon donor to the Red Cross.

"A young boy drowned at the Victory Park bridge," Egnatuk says. "Liz came to me and said, 'We need to teach the community how to swim and it needs to happen now. You tell me how much money you need and I will have it,'" Egnatuk recalls. Within two weeks, Liz had raised funds and convinced Albion's Recreation Department to provide free swim classes, while Egnatuk recruited and trained instructors, many of whom were her former and current swimmers.

"Albion taught hundreds of kids to swim and that program lasted for years. I think that's one reason the community continues to support the pool," Egnatuk says.

"After one class, Liz told me, 'I'm so excited about this exercise. I'm going to get back into my skinny jeans,'" Egnatuk says. "She was a hard worker and a go-getter. You never said 'No' to Liz Fraser."

Liz is survived by five children, including Diane Fraser, '84, 12 grandchildren and 20 great-grandchildren.

Family visitation will take place Friday, July 24, from 11 a.m. to 12:45 p.m. in Goodrich Chapel; face masks will be required and physical distancing will be observed. A private ceremony is scheduled for 1 p.m., with live streaming via Elizabeth Amy Fraser's Facebook page.