Eugene Robinson, nationally acclaimed columnist for The Washington Post, will bring his unique insights on life in America to Albion’s 2017 Martin Luther King, Jr. Convocation and Community Celebration. He will present "We're Someplace We've Never Been: Race, Diversity and the New America" as part of the Monday, January 30 event, scheduled for 7 p.m. at the Bohm Theatre in downtown Albion. Robinson (right) won the 2009 Pulitzer Prize for his commentary on the historic 2008 presidential election. His work frequently examines national and international issues through fascinating and personal stories of everyday Americans. During his 36-year association with The Washington Post, Robinson has also served as city editor, South America correspondent and London bureau chief.

Early in his career, Robinson covered the Patty Hearst trial for the San Francisco Chronicle. The native of Orangeburg, S.C., and University of Michigan graduate was also the first African American co-editor-in-chief of The Michigan Daily.

The MLK Convocation, presented by Albion College and the Albion Branch of the NAACP, is free and open to the public. The Bohm Theatre, which originally opened in 1929 and received an award-winning restoration in 2014 after a six-year closure, is located at 201 S. Superior St. For more information, contact the College's Gerald R. Ford Institute for Leadership in Public Policy and Service at 517/629-0368 or . 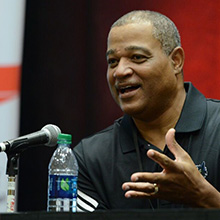 Barnes (right) has touched hundreds of lives over more than 35 years as a men's and boys' basketball coach and scout at the international, professional, collegiate and high school levels. Most recently, after eight years as a scout for the NBA's Minnesota Timberwolves, he launched Play Right Basketball Academy in Dallas, Texas.

Barnes' keynote opens the event, which celebrates the legacy of the Rev. Dr. Martin Luther King, Jr. Afterward there will be lunch and small breakout sessions for continued dialogue, facilitated by College faculty and staff as well as members of the Albion community. At approximately 1:30 p.m., groups will proceed to various sites in town to collaborate on service projects.

For more information on the MLK Day of Dialogue and Service, contact Keena Williams, director and president's special advisor for global diversity, at 517/629-0501 or email the Office of Intercultural Affairs at .