NEA Grant Brings 'The Big Read' Back to Albion 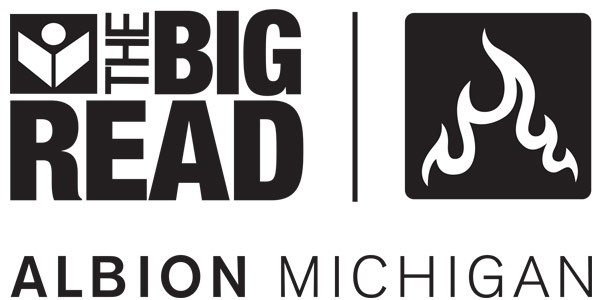 For the second straight year, Albion will host The Big Read, a nationwide project that aims to bring communities together through shared reading experiences.

The effort is made possible by an $11,500 grant from the National Endowment for the Arts, which was announced today. Through private donations and in-kind efforts, the total financial support comes to $40,000, according to Jess Roberts, associate professor of English at Albion College and director of Albion’s Big Read.

Albion is one of 77 cities nationwide (and just four in Michigan) to receive a 2016-17 Big Read grant.

“Any time that a community has a chance to experience something together and discuss that experience with others, it’s an opportunity for them to share, empathize, improve understanding and respect, and build positive relationships between each other,” said Cindy Stanczak, director of the Albion District Library and a member of the Big Read Planning Committee.

This year’s celebration will run from October 1 to November 1 and will feature the book Fahrenheit 451 by Ray Bradbury. Written in 1952, Fahrenheit 451 is a novel about Guy Montag, who lives in a dystopian society that seeks to destroy books. He begins the novel by burning books for a living but ends up risking his life to protect them. Bradbury said he got the title from what was believed to be the temperature that paper burns.

Stanczak believes this is an important book, especially for younger readers.

“It’s not an easy read,” she said. “Its topics are more immediate, especially in an election year, and in the modern era when information is both more easily available and yet more difficult to trust.”

The month-long Big Read will feature an opening parade and celebration in Albion’s Holland Park, along with discussions of the book hosted by local organizations throughout town, many of which will be led by Big Read student leaders (rising eighth to 10th graders from the immediate Albion area).

Additionally, events will include lectures by award-winning authors as well as by John Eller, director of the Center for Ray Bradbury Studies at the University of Indiana-Purdue University Indianapolis and editor of the Collected Stories of Ray Bradbury. Also being planned: a film series at the Bohm Theatre, group discussions and more.

For more information about The Big Read in Albion, visit albionbigread.org, its Facebook page or its Instagram page.

The Big Read is a program of the National Endowment for the Arts in partnership with Arts Midwest.