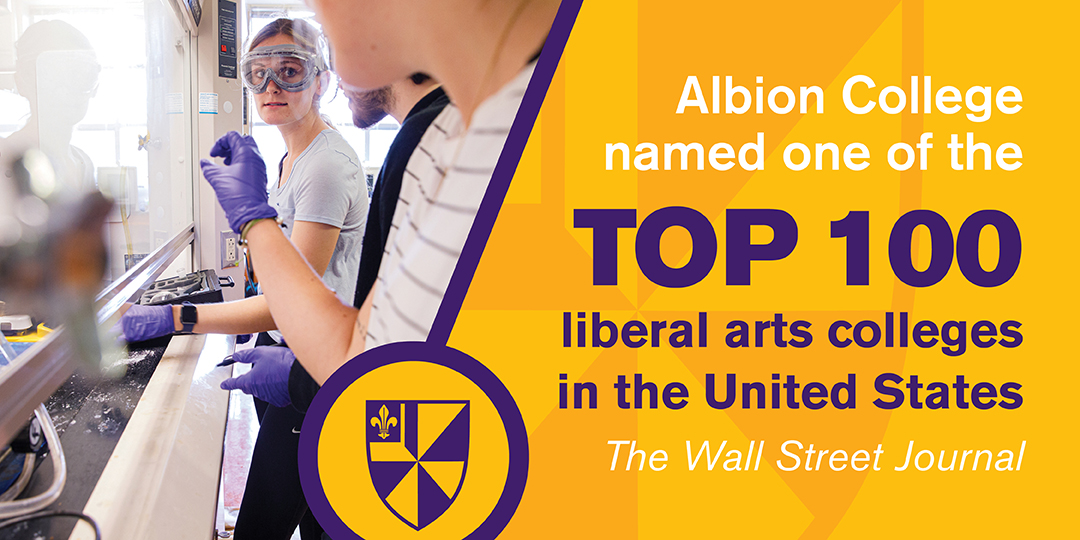 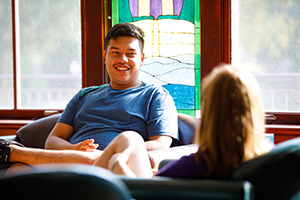 Students have a conversation in the Kellogg Center's Langbo Living Room.Albion College is ranked among the top 100 liberal arts colleges in the United States in the 2021 Wall Street Journal/Times Higher Education College Rankings. As well, the “pioneering” ranking service places Albion in the top 25% of colleges and universities in the nation.

“Albion College is providing the most comprehensive and meaningful liberal arts education possible, just like we always have,” said Albion President Dr. Mathew Johnson. “Nothing drives home the point more than the way students, faculty and staff have pulled together during this challenging time. Albion is a place of purpose, belonging and action. These three values are clearly illustrated in our approach to the semester. We are a community of driven problem solvers.”

Each year, the collaboration between The Wall Street Journal and the United Kingdom’s Times Higher Education produces the World University Rankings, a definitive list that focuses on university research; the joint effort in their U.S. College Rankings measures institutions’ student engagement, student outcomes and learning environments.

“Albion College has welcomed one of its largest classes in a decade despite a pandemic that is impacting colleges across the country,” said Dr. Hernan Bucheli, Albion’s vice president for enrollment and strategic initiatives. “Against the headwind of those challenges, Albion is providing the quality liberal arts education that is so vital in a changing world. This ranking recognizes Albion College as a place where student engagement, student outcomes and the learning environment is paramount.”

Washington Monthly recently placed Albion as the No. 2 liberal arts college in Michigan, No. 24 in the Midwest and among the top nationally. The magazine also lists Albion in the top quintile of “Best Bang for the Buck” colleges and universities in the Midwest region.

Money.com ranks Albion as the top small college in Michigan and No. 38 in the U.S. Additionally, the Princeton Review included Albion as one of its Best 386 Colleges, and the College once again was featured in The Fiske Guide to Colleges.