Albion Ranks No. 1 in Student-Services Spending Among Michigan Private Colleges

The Chronicle of Higher Education list also puts Albion in the top 6% nationally. 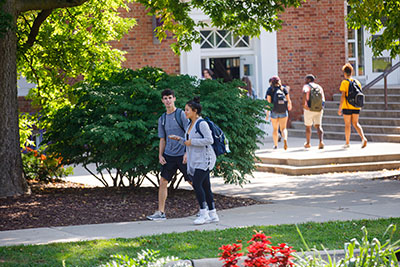 Albion students outside Baldwin Hall, the College's primary dining facility.Albion College placed 60th out of 1,063 private four-year U.S. colleges and universities in student-services spending for 2017-18 in a ranking published earlier this month by The Chronicle of Higher Education. Within Michigan, Albion is ranked No. 1 of any private college or university.

Student-services investments pay for programs and activities designed to support students' emotional and physical well-being and to encourage their intellectual, cultural and social development outside the classroom. Other student-services investments are devoted to career guidance—to help students explore their vocation to do good and do well after graduation. (In fact, Albion College was recently acknowledged by Detroit’s WXYZ-TV as one of the seven top colleges and universities in Michigan for highest wage earners after graduation, as determined by Payscale.com. Albion was the only liberal arts college to make the list.)

According to The Chronicle, for Albion’s 2017-18 enrollment, spending dedicated to student services amounted to $9,182 per student and 23.6 percent of total spending by the College.

“We value being student-centered and developing strategies that allow us to focus on supporting student success both inside and outside the classroom,” said Leroy Wright, vice president for student development and dean of students. “We are always working as a College to remove barriers that may impede a student’s ability to persist to graduation. Our goal is to secure funding resources that help to make these strategies sustainable and to minimize our student's everyday stresses.”

The Chronicle report represents another strong ranking in the last few months for Albion, highlighting the overall quality of an Albion College education.

A Georgetown University study exploring the return on investment of a degree from 4,500 U.S. colleges and universities put Albion in the top quintile in Michigan across all career stages and in the top 14 percent nationally long-term. College Factual named Albion among the top 10 percent in its 2020 national list of Best Colleges for the Money, and ThoughtCo.com featured Albion as one of the Midwest’s top 30 colleges, a group that includes the University of Michigan, Notre Dame and Northwestern.