Account of the 1970 Albion win over Michigan State in The State News, the MSU student newspaper.

Below are memories of moments immediately following and in the days (and years) after the Britons’ historic victory on the diamond over the Spartans 50 years ago, from the people who were there, shared with Kirk Heinze, ’70. (Read Kirk’s piece, “A Victory for the Ages,” in the Fall-Winter 2020-21 edition of Io Triumphe! magazine.)

Following the game, Danny Litwhiler told Morley that it would be the last time the Spartans would travel to Albion. Any future games would be in East Lansing. The Spartans have never returned to Albion.

Briton infielder Rick Jones also remembers: “After the game, and after Morley had met with our team and reveled in the victory, he and I were still in the dugout after everyone had left. He was still beaming, then got serious and said: ‘Jones, yuh know what Litwhiler told me after the game? He said we were good enough to finish third or fourth in the Big Ten.’”

“Morley, what did you say?” I asked. ‘I told him thanks, but we might be better than that!’”

Spartan Whitey Rettenmund adds: “Albion played us tough, and Beagle just beat us. That’s how baseball goes. A team from a small school can whip a team from a big school on any given day. Albion deserved every bit of that win. As I have thought about that game over the years, I wished Howitt had not hit that homer. It would not have changed the outcome of the game, and Duncan would have had a no-hitter.”

Twenty-three years later, in a conversation with Geoff Petroff, the MSU shortstop in the second game, Heinze heard this account:

“I don’t know if the Albion players know what happened up in East Lansing after we lost that game,” Petroff said. “We had just finished practice the next day, and Coach Litwhiler called us into the dugout. In walked our athletic director, the legendary Biggie Munn, and he was not happy. ‘I’ll make this brief, men,’ Munn roared. ‘There are two things Spartans must never do. One is to lose to Michigan, and, secondly, don’t ever, ever lose to a tiny, little school like Albion.’ Munn then turned on his heel and walked away.”

The Spartans bounced back at home that weekend, sweeping their season-ending twin bill with Ohio State. MSU finished 9-7 in the Big Ten, in third place, and 28-15 overall. The losses cost the Buckeyes the Big Ten crown.

Morley kept his promise and took the team to Schuler’s restaurant in Marshall. But true to form, as soon as everyone was seated, he barked out precisely which meals the players could select in order to preserve some of the program’s limited budget.

Next season, Albion seniors Kale, Macy, Moeller, Harry Turney and Rick Jones would lead the Britons to the MIAA crown, Fraser’s fifth title. He would win one more in 1972 before handing over the coaching reins to Frank Joranko. Fraser’s six titles place him among the top five coaches in MIAA baseball history.

Until their final days, Morley and his wonderful wife, Liz, insisted the victory over MSU was the most memorable win of Morley’s 14-year baseball coaching tenure. Kale puts it perfectly: “We loved playing for Morley, and, to a one of us, he and Liz provided support and guidance not just while we were at Albion, but throughout our lives.” 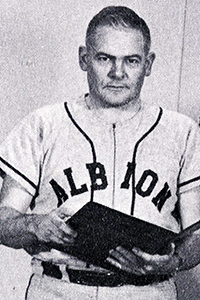 Coach Morley FraserAs a footnote to these postscripts, there is this poignant and inspirational memory from Rick Rodes. It occurred during the 1970 spring trip—an incident which speaks volumes about Morley Fraser’s character and values:

“In my freshman year, we were returning from the southern baseball trip in the car with Morley. An Albion baseball tradition was that freshmen were required to ride with Coach Fraser on the spring trip. In the back seat were Kezlarian, Bowman and myself. In the front were Morley and Dennis ‘Mel’ Farr, the only African American player on our team.

“After many hours of travel, we stopped at a Best Western in Louisville, Ky. Morley pulled up to the front entrance and asked Mel to go in and see if they had any rooms, which appeared likely because the parking lot was fairly empty. Two minutes later, Mel came back to the car in tears. He said after seeing the room-key box behind the counter was nearly full of keys for the many unoccupied rooms, he was told by the attendant that the hotel was sold out. Morley was furious! He got out of the car and marched into the hotel lobby. We could hear Morley screaming at the hotel manager about his racial injustice. Morley steamed for the next two hours, talking about discrimination and how evil and destructive it was. The next day, when we returned to Albion, he immediately contacted Best Western’s national headquarters to report what had occurred.”