After attending Albion in the early 1960s, Richmond built successful businesses in West Michigan as well as a strong penchant for philanthropy. 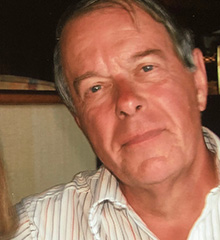 A $7.5 million estate gift from Robert Richmond, who attended Albion College from 1959-61, will impact students in significant and lasting ways.Robert Richmond began his higher education at Albion College more than a half-century ago. Those two years in the south center of Michigan left an impact on him that continued his entire life and, while he didn’t receive a degree from Albion, it is one of three institutions where he has left a remarkable legacy.

“Albion definitely left an impression on him,” said Lori Troop, Richmond’s stepdaughter. “We talked about education a lot. He believed some kids enter college unprepared for the workload and how to manage their time. And he always came back to the fact that schools need to teach kids how to think. He felt everyone should go to college who wanted to and learn about life in general.”

His desire to help students who need it most was one of the driving factors in the gift that will exceed $7.5 million, making it one of the largest gifts in Albion College’s history.

“He said that many times kids who go to college don’t know what they want to do,” said Troop, who taught second grade in Hudsonville, Mich., and now lives in Grand Rapids. This gift was her stepfather’s way to help those students answer those questions at one of the nation’s top-ranked residential liberal arts colleges.

“Albion College is a place where the faculty dig deep down into a student’s abilities and show them what they can do,” said Robert Anderson, executive vice president for institutional advancement and external affairs. “It inspires them to be bold in business and policy, arts and humanities, medicine and science in a way that changes lives, as Bob experienced. We are honored to put Bob’s generosity to work for future generations because of this incredible gift.

“In talking with his family,” Anderson continued, “we know just how important education was to him and how providing an opportunity for students to learn in the best environment possible is crucial. We are putting these funds to use immediately to help this year’s high school seniors whose families were financially devastated by the COVID-19 pandemic to afford a college education through special tuition scholarships.”

The “Michigan 2020 Promise” is exclusive to all graduating Michigan high school seniors and transfer students, and Albion College will cover 100 percent of tuition and fees for those families making under $65,000 a year, after the Michigan Tuition Grant and federal Pell Grant are applied. As well, families making more than $65,000 can receive dramatic scholarship support (between $92,000 and $135,000) over the course of four years.

Richmond’s gift will also impact Albion students in other significant and lasting ways, including by supporting the College’s landmark Comprehensive Public Health Initiative for a safe return in the fall.

“Mr. Richmond's gift is remarkable and will provide resources for Albion to continue to be a leading innovative liberal arts college,” said Dr. Mathew Johnson, who officially became Albion College’s president on July 1. “It provides for new ways to assist students in need; new curricular and co-curricular opportunities for students to gain the kind of education and experience that will be even more critical in our changing world; and immediate, practical help so we can be together safely in the fall. Mr. Richmond knew the value of education and we will live up to his expectations.”

Added Kim Arndts, ’84, lead director of donor relations and stewardship: “Mr. Richmond’s gift is an example of philanthropy in its purest form. He had no interest in seeing his name carved in stone, but instead just wanted to make the world a better place by giving tomorrow's leaders access to education.”

Richmond was born in Beaver Creek, Mich., and graduated from Gerrish-Higgins High in Roscommon before attending Albion College in the early 1960s. He then went to the University of Michigan before graduating from Central Michigan University with a degree in business administration.

He would go on to a career with IBM in which he helped businesses set up their computer systems. But Lori said her stepdad remained decidedly low-tech, preferring to use his flip phone for convenience, even in the age of the iPhone.

“He couldn’t quite make it to a smartphone,” she said with a laugh. “He’d buy a computer but he didn’t like things to be repaired, so he’d just buy a new one when he needed it.”

Bob and his wife, Lois, created B&L Plastics in Rockford and later B&L Development before retiring to Rio Verde, Ariz., where they enjoyed traveling.

Philanthropy was always part of the couple’s life as they helped endow a center for disabled adults and created a foundation for students in Michigan and Arizona who needed assistance.

“He was a numbers man and he was a good investor,” Lori said. “They didn’t spend a lot of money on themselves, but were giving of their time and money to help others.”