“Adventure is very important to me,” she says. “I have real curiosity.”

Perhaps it’s no surprise then that she settled into a career that involves helping college students see for themselves what’s going on somewhere else—specifically in other countries.

Casey began in July as Albion College’s director of the Center for International Education and Off-Campus Programs, replacing the retired Debra Peterson, with a goal of solidifying Albion’s reach internationally and, perhaps more important, emphasizing for students the benefit of studying abroad. 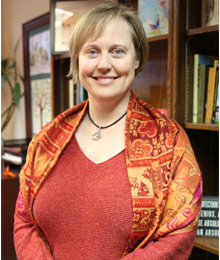 “It changes lives,” says Cristen Casey about studying in another country. “And it changes us in ways we can’t know in advance."

Casey, who admits to a case of “wanderlust” on occasion, comes to her new position not only from professional, but personal, experience.

For more than 20 years, she served in various capacities coordinating international programs at the University of Texas at Dallas. But before that, she was the one looking for new adventures, new challenges and new ways to find out what was just over the horizon.

Born in Colorado, raised in Indiana and then in Ann Arbor, Casey attended Kalamazoo College and majored in French literature and international area studies. She then earned a Fulbright Scholarship and taught in France before taking six months to backpack around the United States. After that, she was off to Honduras to work for Habitat for Humanity and teach English for a year.

“I wouldn’t trade those [experiences] for anything,” she says.

But she wasn’t done.

In 1997, she was traveling from Arizona to Asheville, N.C., when she stopped in the Dallas area. A friend showed her a help-wanted ad for an international student advisor at UT-Dallas.

“I was just floating,” she says. “I wasn’t really looking for a job, but I applied and thought if I got it, I’d stay; and if I didn’t, I’m headed to Asheville.”

She did not head to Asheville.

“Our goal was to establish a strong support system for international students,” she says. “We wanted students to know that they belong here, that they contribute significantly to the campus and community. I absolutely loved my job. There was always a new challenge.”

Now Casey is taking on a new challenge at Albion and admits much of her time so far has been putting together a plan that will allow the international program to continue to fit into the overall Albion experience.

This year, Albion has some 35 international students from 17 countries including France, Mongolia, China, Pakistan, Costa Rica and elsewhere.

And that works both ways as 17 Albion students are set to travel abroad in the spring semester to study in 13 countries that include Japan, New Zealand, Ireland, Morocco and Rwanda. That will follow the 23 students who have studied abroad during the fall semester.

Casey hopes to see those numbers increase over the years but understands it can be a financial burden not only for the students but for the institution. Her hope is to partner with other colleges to make it less of a financial challenge.

“My real goal is to diversify and expand opportunities for students and make it more financially viable by decreasing costs for everyone involved,” she says.

She also wants to enhance internship opportunities for Albion’s international students, believing that this will not only benefit the students but local employers as well.

And she hopes students will learn a little of what proved so valuable to her when she traveled.

“When I traveled around and lived in Honduras, it was important for me to experience being a part of a cultural minority,” she said. “It broadened my perspective, taught me a lot about myself and others, and allowed me to grow my intercultural competence skills. It impacts one’s ability to engage respectfully with other people.”

And she sees that potential at Albion, where international students can teach American students and vice versa, adding that her times living abroad collectively were the greatest adventure of her life.

“It changes lives,” Casey says. “And it changes us in ways we can’t know in advance. It’s provides us with an understanding of where we fit into the world.”