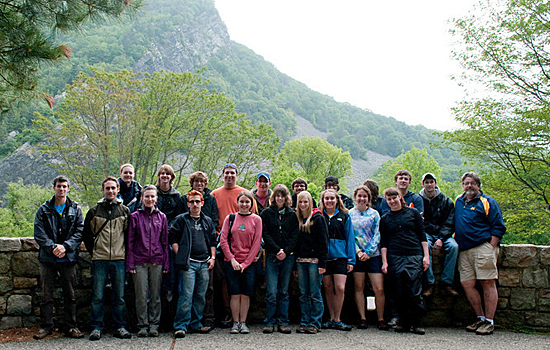 Geology Department professors Bill Bartels, Carrie Menold, and Mick McRivette along with 18 students spent eight days and visited approximately 40 outcrops and locations. Many geology stops were made in the Valley and Ridge of Pennsylvania, the Rift Basins of Pennsylvania and New Jersey, and the Coastal Plain of New Jersey.

The class also examined the ancient bedrock of Manhattan Island in New York City. Geological and cultural stops were made at Gettysburg Battlefield, the site of the Great Johnstown Flood, and Lehigh Gap. Collecting stops were made at Big Brook for fossil shark teeth, Franklin Mineral Mines for fluorescent minerals, and Sandy Hook State Park for modern sea shells.