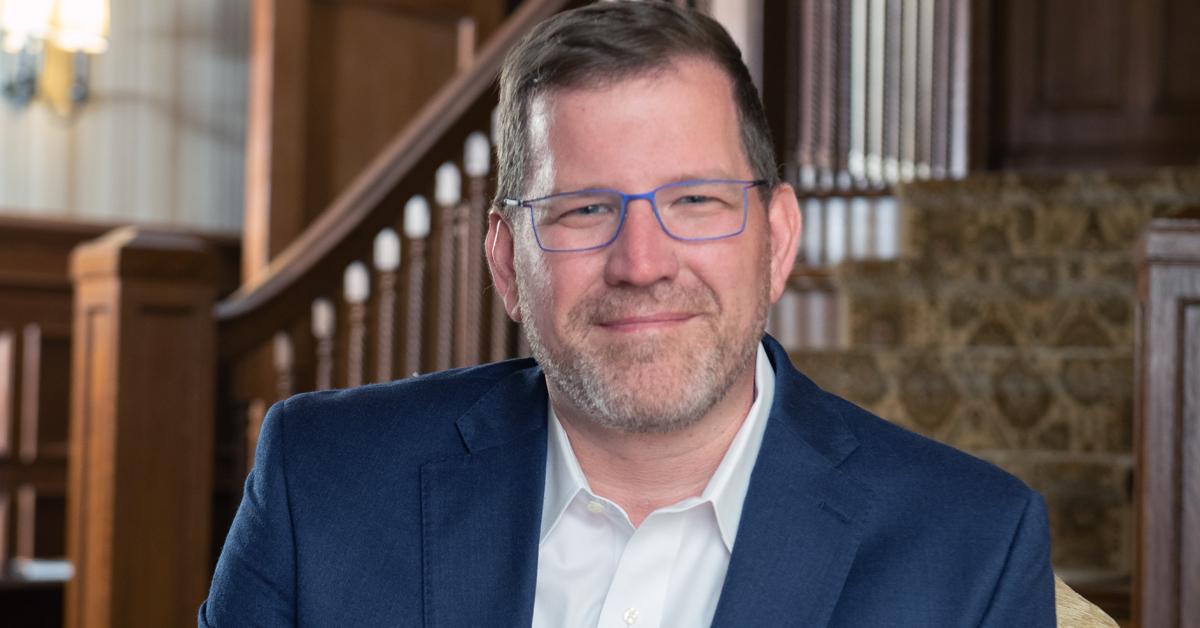 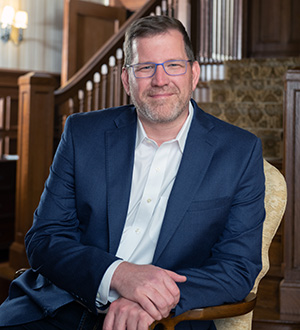 Dr. Mathew B. Johnson, 17th President of Albion College, pictured recently in the President’s Home at 501 E. Michigan Ave. Planning for President Johnson’s inauguration is well under way: the ceremony is scheduled for Saturday, October 17, as part of Homecoming festivities, with details coming soon. (The date is subject to change based on evolving CDC guidelines for large gatherings.)In the midst of a transformative time unlike any other for Albion College and its home community of Albion, Michigan, Dr. Mathew B. Johnson officially took his place as the College’s 17th President on July 1.

President Johnson succeeds Dr. Mauri A. Ditzler, who has retired after a highly impactful and meaningful six-year presidency.

A sociologist and internationally known expert on community engagement, President Johnson formally enters his new role after five years at Brown University, where he served as Associate Dean of the College for Engaged Scholarship as well as Senior Fellow and Executive Director of the Howard R. Swearer Center for Public Service.

“I am honored to join this bold, passionate learning community,” said President Johnson. “There are many challenges we face as a new academic year begins, but together—with the College community and the community of Albion—it will be a year full of promise and excitement. I look forward to working with everyone as we continue to build on Albion College’s rich legacy and pave the way for its bright future.”

For President Johnson, his new responsibilities come at a time of great upheaval and uncertainty not only for residential liberal arts colleges but across all of higher education. The COVID-19 pandemic has challenged institutions nationally and globally on how best, and most safely, to provide a quality educational and social experience for their students.

“It’s a unique situation,” he said. “Other college presidents have assumed the role during world wars and economic downturns, and this challenge is not unlike those. To me, however, problems like this are great puzzles to be figured out. That’s how I’m approaching COVID-19.”

Indeed, since accepting the job in April, Dr. Johnson has already brought new energy and ideas in an effort to move the College forward, wasting little time as he seeks to expand and enhance Albion’s reputation in the national liberal arts college landscape. In the process, he has placed a premium on transparency for both the campus and the Albion community.

“I will need everybody’s help, and the only way I get everybody’s help is if everybody knows what’s going on,” he said. “I make decisions, but that also means I make mistakes. I’d rather spend time deciding and learning from the occasional mistake, than worrying about the potential mistakes and not deciding in time to make a difference.”

Unsurprisingly, just about every working minute thus far has been dedicated to collaborative work with College constituencies in planning for in-person classes this fall and an overall semester that will allow students to safely start, and return, to their campus life.

That semester will include the implementation of two seven-week, two-course learning modules—the first starting August 24, the second October 13—which will allow students to learn on campus but limit their number of contacts. Fall classes are scheduled to conclude by Thanksgiving. Details on campus life outside the classroom are rapidly developing and will be forthcoming.

Additionally, in cooperation with the Lisa and James Wilson Institute for Medicine, a landmark Comprehensive Public Health Initiative will feature a range of academic components for students—including training in contact tracing and expanded nursing opportunities—as well as public health training for all members of the Albion College community. The multifaceted initiative also includes an online seminar series developed and led by Dr. James Wilson, ’77, featuring world-recognized experts in public health and policy. That series begins September 10.

“This will be an extraordinary academic year,” President Johnson said. “Our preparations, and the teamwork that has gone into them, already has been nothing short of inspiring. Still, the fluidity of the public health reality demands, to a degree, that we learn as we go.

“We are looking forward to welcoming the largest incoming class of first-year students and transfer students in at least the last decade, and they are excited about what Albion has to offer,” he continued. “It will be our job to provide them with the quality residential liberal arts college experience they expect.”