“Some of you were with me five years ago when we tested the Bohm marquee, to just see if the lights worked,” said President Mauri Ditzler, welcoming the Bohm Theatre audience to Albion’s 2020 Reverend Dr. Martin Luther King, Jr. Convocation and Community Celebration on January 28. “Back then, there weren’t many lights on in downtown Albion, and when the [marquee] lights came on, everyone cheered and we thought, ‘Great things are going to happen here.’ And indeed there have been.”

Dannia Edwards, ’83, who in 2019 became the first African American female judge in Minnesota’s First Judicial District, shared her perspective on justice for the Convocation keynote.

Edwards noted that while African Americans have already seen the election of the first black U.S. president and a new naval aircraft carrier named for Pearl Harbor hero Doris Miller, the country still struggles with prejudice and discrimination. She touched upon national headlines involving the killing of African American men, legal injustices against immigrants and Native Americans, and even her own experience with discrimination as an African American female buying a new car.

“These stark facts will cause some to be perplexed, if not despondent,” she said.

Edwards asserted that as America works to achieve equality, it must also monitor diversity. She quoted African American businesswoman Melody Hobson, saying, “We must not be color blind … when we enter the courtroom, the boardroom, and see everyone is white, all of us must ask, ‘What is wrong with this picture?’ We must learn to have continued conversations about race, so we can better understand each other’s perspectives."

“It will result in better consequences for our future,” Edwards affirmed. 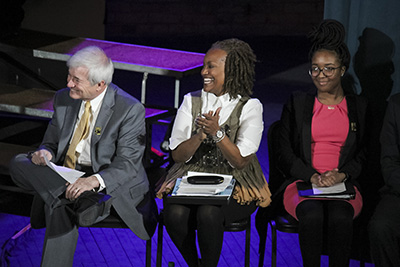 Ditzler, Edwards and Ware share in the moment on the Bohm stage.She finished with her delight in staying at the Courtyard Marriott hotel, one of many changes from the Albion she knew in he early 1980s. “I see Albion College’s 200 African American students, compared to the 30 we had in 1983,” she said. “I see—unlike the past—Albion College and citizens creating a partnership that will benefit both. I have to give a hand to that.”

Mae Ola Dunklin, retired Albion Public Schools principal and current College trustee, told the audience that earlier in the day Edwards said that, as a student, she didn’t realize there were African Americans living in Albion. “I told her, ‘It’s different now,’” said Dunklin with a smile, referring to the greater involvement of Albion residents with the campus community.

She continued: “I want to turn to ‘The Man’—and I’m saying it to the 16th president of Albion College—you have made a difference,” Dunklin said, speaking to Ditzler from the lectern. “Dannia Edwards stands here tonight to tell us how pleased she is to see what’s happened to Albion College. We have to stand here today and say how pleased we are to see what’s happened to our city. We have to thank you, too.”