Tuition, housing and meals in exchange for service in the Albion community: first-years, sophomores, juniors and seniors are now in place 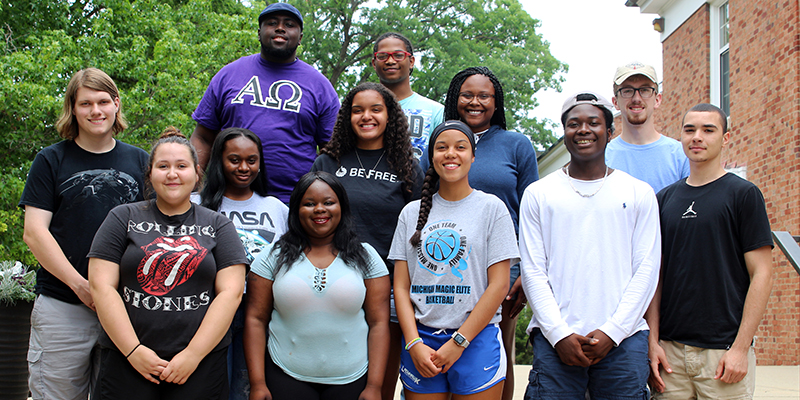 Albion College welcomes its fourth class of Build Albion Fellows, and it’s the biggest one yet.

The Class of 2022 will feature 13 incoming first-year students who reside in the local school district and attended area schools and who will receive four-year tuition, housing and meals from the College. In return the Fellows will engage in service projects that will help the community.

The program launched nearly four years ago and, for the first time this fall, all four cohorts will be represented with 33 total students. The class of ’19 has four students and the classes of ’20 and ’21 have eight students each to go along with the newest group.

The Build Albion Fellows (BAF) program was first introduced in November 2014 as a way to help local students interested in pursuing a liberal arts education get that opportunity at Albion College. Eligible students need to live within the greater Albion area or former Albion school district and, after being admitted to Albion College, demonstrate high financial need based on the Free Application for Federal Student Aid (FAFSA).

“We are so pleased with what has transpired with Build Albion Fellows,” said Albion College President Mauri Ditzler. “With this latest class, Albion again has a chance to provide a powerful liberal arts education to its local students. But, just as important, the Fellows have given back, and will continue to give back, to the community that means so much to them.”

While this is the largest class to date, it was also the largest group of students to apply for the program, according to Clarence Stirgus, ‘12, Albion's assistant director for global diversity who coordinates BAF. Originally set up to welcome as many as 40 students over a four-year period, the 10-student maximum annual cohort was waived this year after consideration during the selection process.

“There were so many qualified candidates and the selection committee kept asking if we could just take all of them,” she said. “This is an amazing group of students.”

TaRaya Austin: An Albion native and a 2018 graduate of Marshall High School, TaRaya lists determination, encouragement and leadership as her strengths, She enjoys volunteering and community service and has worked on various projects included Santa’s Helpers. She is interested in studying biology at Albion College with an eye toward nursing.

LaRoy Bell: At age 27, he is the oldest Build Albion Fellow. An Albion High School graduate, he has been involved in the Albion 4-H, is a local youth pastor and has spent years working with the Albion community. He is also the older brother of Chris Bell, ’20, another Fellow. LaRoy is interested in music, education, business and communications at Albion.

Olivia Hancock: A graduate of Marshall High School in 2018, she wants to give back to the Albion community where she was born and raised. An avid athlete, she plans to play basketball at Albion with academic interests focusing on business, marketing and management.

Ken’Yatta Hill: Listing problem-solving as one of his skills, the Marshall High graduate wants to give back to Albion where he was raised. He has been involved in the 4-H Creative and Expressive Arts, the Mayor’s Youth Coalition and Kids at Hope. His interests in college include engineering and mathematics.

Alexis Horrell: Though she grew up in Albion, she graduated in 2018 from Concord High. Her interests run toward music, where she plays flute and would like to be part of the marching band’s color guard. She is also a member of the Concord National Honor Society and volunteers. Her academic interests are science and literature.

Alyssa Lowe: A 2018 graduate of Marshall Academy and an Albion native, she helped mentor fellow students and was treasurer of the school’s National Honor Society. She also helped raise money for the school’s athletic department by coordinating a basketball tournament. She enjoys basketball and volleyball and is interested in studying kinesiology and pre-med at Albion.

Domonic McDonald: He lists persistence and reliability among his strengths. An Albion native who graduated from Marshall High in 2018, he plans to run track and play football at Albion and is also interested in theatre and volunteering. His college interests include psychology and computer science.

Haley McQuown: A 2018 graduate of Marshall High, she has been involved in Albion community activities for years, including the library’s summer reading programs, Festival of the Forks and the Albion College International Piano Festival. She is interested in dance, marching and concert band, and theatre, and her academic interests focus on biochemistry and biology.

Joshua Phillips: His family has a long history in the community of Albion as his grandparents and great-grandparents owned businesses downtown. Joshua has volunteered for a number of causes, including the Walk for Warmth. Passionate about the outdoors, the Marshall High graduate plans to focus on environmental science, engineering and psychology at Albion.

Akaiia Ridley: A native of Albion who graduated from Marshall High in 2018, she has been part of the Mayor’s Youth Coalition for five years, which included a trip to France to visit Albion’s Sister Cities of Noisy-le-Roi and Bailly, France. She is also a member of Junior Optimist International and has worked with Albion’s Big Read program. She wants to study communications at Albion.

D’Mitrius Robinson: Viewing himself as a good leader who enjoys working with others, he sees Buld Albion Fellows as a chance to utilize those skills and learn new ones. A 2018 graduate of Marshall High, he has lived in Albion for four years and has helped out on various community projects. He wants to play basketball and his academic interest is in business or political science.

Shi’Terriona Straham: Born and raised in Albion, she has been a part of numerous volunteer and community efforts including Kids at Hope, Mayor’s Youth Council, Sisters Influencing Society, Beautify Albion and the Big Read. She also helped with the reimagining of Holland Park. She is a 2018 graduate of Marshall High School.

Trey Warner: A lifelong Albion resident, he has volunteered at the Franke Center for the Arts in Marshall and at Samaritas in Jackson. A 2018 Homer High graduate, he played in the jazz, pep and marching bands and was in the drama club. He is also earning credits at Kellogg Community College and his academic interests involve pre-med and chemistry.