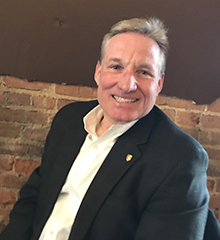 Keith Roberts, '81, is vice president of finance for Dimplex Thermal Solutions in Kalamazoo.Keith Roberts, ‘81, relates a story—OK, two stories—that reflect his love, his interest, his passion for Albion College.

The first goes back to 1994 when the Albion College football team is playing in the NCAA Division III national championship semifinal against St. John’s University in Collegeville, Minn.

“I called 10 buddies and I asked them if we should road-trip to the semifinals or wait, assume they’ll win, and go to the national championship,” says Roberts, who weaves stories like a true artist. “So we decide to wait. So I’m home and trying to listen to the game on the radio but I couldn’t get a good signal. So I went out to my car and turned on the radio and sat in the cold in my driveway for three hours listening to the game.”

He roars with laughter at the memory.

“And after Albion won, I called the same 10 guys and we made our plans to drive to Salem, Virginia, for the championship game.”

The second story Roberts recalls is from just the last month, and, again, it involves sports. Unable to travel to Angola, Ind., to watch the Britons men’s basketball team play Olivet College in the semifinal of the Michigan Intercollegiate Athletic Association tournament due to work issues, he was on his way to a business meeting in Kalamazoo and caught the tail end of the contest on his phone—sitting in his car, again, in a restaurant parking lot.

“It got down to the last couple of minutes and I saw the people I was supposed to meet going in the door,” he says. “And I said, ‘Really?’ But I also knew I wasn’t leaving until it was over.”

An Idea and Timing Come Together

Simply put, Keith Roberts would do anything for Albion College.

“I am passionate about everything regarding Albion,” he says. “It’s hard to define the passion but the moment I walked on campus in 1977, I fell in love with it.”

A native of Delton, Mich., who now lives in Augusta, Roberts remembers how he not only was taken by the campus but with the community of Albion.

“I never wanted to leave,” he says. “I spent all three of my summers working in Albion. I even spent two summers playing for Albion in the city softball league.”

For Roberts, who majored in economics and management and was a member of the Professional Management Program (the forerunner of today’s Carl A. Gerstacker Institute for Business and Management), Albion helped set him on a path of accomplishment that he has never forgotten. He has enjoyed a successful career in finance and is currently vice president of finance for Dimplex Thermal Solutions, a manufacturer of industrial chillers that is headquartered in Dublin, Ireland, and which has an office in Kalamazoo.

And, as Roberts sees it, right now is the right moment to both reflect on his Albion experience as a student and roll out a plan to help create future Briton experiences for alums and students alike.

“It was the marrying of idea and timing,” he explains.

Roberts has pledged a $1.5 million estate planning gift that will be used to double 60 scholarship gifts of $25,000, thus bringing all of them to the $50,000 endowed scholarship threshold.

“This is important to me,” Roberts says of his matching gift. “There are people whose Albion experiences may not have had the same depth or breadth as mine, but everyone walked away with something they loved about Albion. And I know I wouldn’t be where I am without that experience.”

According to Roberts, his estate plan leaves the option open for the College to use the money as it sees fit.

“The focus of the gift is whatever is best for the College,” he says. “There are people there every day who know higher education a million times better than I do.”

Roberts’ hope, though, is that his gift will spark an interest in other alumni to donate in ways they feel are best suited to them and to Albion College.

“Life is an ebb and flow, and I was able to do this,” he says. “Hopefully it will generate matching gifts, and if others want to influence people, that’s fantastic.”

To learn more about matching gifts, visit albion.edu/matchinggifts, or contact Advancement Services online, by email at or by phone at 517/629-0956.