The Larry and Sarah Steinhauer Endowed Scholarship is the first such gift awarded to an Albion student enrolled in the Prentiss M. Brown Honors Program.

Those who remember Larry Steinhauer may be surprised by Sarah Steinhauer’s recollection that as a graduate assistant in Florida, the future Albion economics professor taught in shorts and sandals. “After he retired, he never wore a tie again, either,” she says. "But at Albion, he may have been the last one to wear a coat and tie every day. That was his way of honoring the profession.” 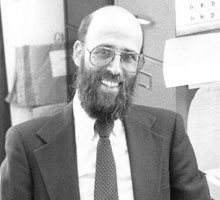 Larry Steinhauer served as a faculty member at Albion for 32 years.

He may not have gotten his colleagues on his sartorial train, but Steinhauer (who died in December 2017), made other impacts on the Economics and Management Department, the Prentiss M. Brown Honors Program, and many alumni. More than 40 years in Albion likewise impacted the Steinhauers.

”We never talked about making a gift,” Sarah says. “But as soon as he died, I had this very strong sense that I wanted to do something for the College. I had no idea what, but as I talked to Institutional Advancement, it became clear that I wanted a scholarship for the Honors Program.”

At the end of his tenure with Honors, Dr. Steinhauer was its longest-serving director (he’s still the second-longest), during which time he doubled the size of the program, created both the Honors Council and its beloved Midnight Desserts, and developed and taught many popular seminars.

Sarah explains that Larry, a graduate of City College of New York, was the first member of his family to go to college. “He had to pay $50 each semester for tuition, and he couldn’t have gone to college otherwise,” she says. “He understood that students need help.”

Similarly, Dr. Steinhauer took a keen interest in supporting first-generation students. He frequently mentored students who came to Albion from lower-income families and pushed the administration to increase its student-body diversity, both geographically and ethnically.

“Too many people become successful and want to pull the ladder up behind them,” Sarah reflects, “but we need to extend the ladder back down. That was very important to Larry. He always felt that resources should go first to young people.”

Sarah is pleased that the Larry and Sarah Steinhauer Endowed Scholarship is the first such gift designated specifically for an Honors Program participant. “He loved the Honors Program,” she recalls, “because students wanted to be there, and they were engaged. He loved how faculty were just as eager to teach in it. His heart was in Honors and this scholarship makes us part of that."

Anyone interested in donating to the Larry and Sarah Steinhauer Endowed Scholarship should contact Albion College Institutional Advancement at 517/629-1254 or visit advance.albion.edu/steinhauer.