Teeing Up a Tribute

They called him “Rads.” And when Peter Radowick entered a room, everyone knew it.

Delta Sig brothers gather for their annual golf trip in Sarasota.“He was extremely popular, extremely well liked,” says Kevin Roberts, a friend since their days together at Albion College. “You could call him a gentle giant in some ways. He never really had an enemy and I never saw him lose his temper.”

“He was just bigger than life,” says another friend, Ron Barry. “His laugh was infectious. Everyone enjoyed being around him.”

Radowick was the leader of a group who, in most cases, had all met and grown up at Albion, all members of Delta Sigma Phi, many of them student-athletes who graduated in 1980 and went on to successful careers after college.

And they all remained close because Pete Radowick made sure of it.

The big guy who went on to become a journalist in the Houston area, and who organized a yearly golf outing, held the weekend after Mother’s Day, that would be held in various places around the country.

From a starting group of four the first year, the outing grew to nearly 30 people who remembered their days at Albion and wanted, one more time, to relive the memories.

“Pete was kind of the ringleader pulling the annual event together,” says Bill Bow, another member of the crew. “Even this year, two more came out of the woodwork.”

But this year’s event was different. Sadly different. The event in Sarasota, Fla., was held without Radowick, who had died the previous June of a heart attack. He was just 58. 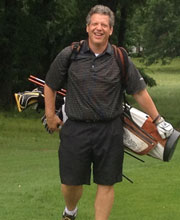 And as the friends mourned and remembered their buddy, they knew they needed to find a way to honor his memory.

It was Bow, remembering an idea he had seen from his daughter’s years at Illinois Wesleyan University, who suggested establishing a fund for students who experienced traumatic loss while in school.

So the Peter Radowick, ’80, Student Assistance Fund was born. The endowed scholarship will benefit a full-time Albion College student who, due to the death or permanent disability of a parent or legal guardian, would be at risk of not completing their Albion education.

To get it started, fellow classmates Kurt Shader and Mick McClelland, along with Bow and Roberts, contributed $5,000 apiece with the hope of building the fund to $50,000. To date, it exceeds $60,000 with plans to keep it going in future years.

“It’s the combination of bringing together many guys who became great friends at Albion and to honor Pete,” Barry says. “It’s a tribute to Pete and a tribute to Albion.”

“We thought, what a perfect tribute to him,” Roberts adds.

For his friends, it was the least they felt they could do for someone who was so special to them.

“Pete was very good about knowing what was going on in people’s lives,” explains Roberts, who has lived in the Dallas area since 1981 and runs a staffing company. “His memory was just phenomenal. He knew about all of our kids. He could remember everybody’s kid and what they were doing and what they majored in and what their job was.”

“He’d always ask how my wife was, and he’d never met my wife,” says Barry, a plastic and reconstructive surgeon living in Saginaw. “He had a special interest in everyone.”

Bow, who lives in St. Charles, Ill., and works for a global engineering construction firm, hopes the tribute to their friend can continue.

“We made the goal and we’re real proud of that,” he says. “This is a great way to honor Pete, but it’s also a heck of a thing to do for the College.”

Anyone interested in donating to the Peter Radowick, ’80, Student Assistance Fund should contact Albion College Institutional Advancement at 517/629-1254.

See how others are Advancing Albion