Scaling Up in Support of Albion

Already long known for giving, the family of Pat Sanford Brown, ’53, honors an amazing life with a new endowed scholarship for music students.

Mary Brown Lenardson, ’85, remembers packing for her first year at Albion College, with some help from her mother, Pat Sanford Brown, ’53. 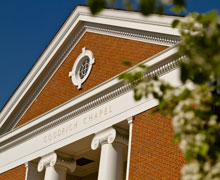 Goodrich Chapel opened in 1957, shortly after Pat and Tom Brown's graduation from Albion. The United Methodist Church served as an important part of their life together.“She gave me her biology lab notes, because we actually had one teacher in common—Ken Ballou,” Lenardson says, referencing the 1947 Albion alumnus. “She also gave me a bunch of cashmere sweaters she wore in college. I said, ‘Thank you, but I’m not taking any of this stuff.’ She was just excited for me to come to Albion, too.”

That enthusiasm for Albion persisted through numerous moves and a remarkable career in service that eventually earned Pat a Distinguished Alumni Award in 1978. It also led her family, which includes five other alumni, to “jump” their established estate gift and create the additional Sanford-Brown Family Memorial Endowed Scholarship for Music, scheduled for its first award in 2019.

Over their 62-year marriage, Pat and Tom Brown II, ’56, were deeply committed to humanitarian causes ranging from international debt relief to peace activism and local community health. Still, Tom says the family was in complete agreement that a music scholarship was the right way to honor Pat, who passed away in February. “Music is peace and harmony, and progress,” Tom says. “We also put in the scholarship description that we hope the recipient will make a mark of love on the world.”

A serious musician who gave piano concerts as a high school student, Pat studied chemistry, biology and Spanish at Albion while Tom studied English and history in preparation for a pastoral career in the United Methodist Church. For a time before her first child was born, Pat worked as a research virologist for Parke-Davis in Detroit. She would go on to serve on state and national United Methodist boards and committees, as well as help found three community orchestras, playing the violin in each. 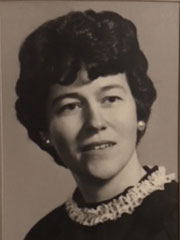 Pat Brown in 1974.Tom also recounts that in her 50s, Pat found surprising new work as a voice teacher. “She took her first voice lessons when she was in her 50s and her voice started to fail. Within a year, she was participating in several choral groups and singing hour-long concerts,” says Tom. “She ended up getting a degree in pedagogy from Cenral Michigan University and taught voice for several years.”

The Browns returned to Albion in 1996 following Tom’s retirement. Upon learning that their beloved Albion Choral Society was no more, Pat convinced Albion’s choir director to take in community members. “There we were, back in the choir 50 years later,” recalls Tom. “The students thought that was pretty fun.”

Lenardson notes that the scholarship is the latest—although not the last—gift in a pattern of philanthropy for the Brown clan. She and her brothers (Steven, ’79, and Peter, ’84) purchased a brick on the Commemorative Walkway leading to the Dow Recreation and Wellness Center and planted a tree in the Whitehouse Nature Center as anniversary presents for their parents. For their part, Tom and Pat were contributors to several Music Department initiatives and regularly attended campus concerts in retirement.

“This is another way to increase our family connection to campus,” says Lenardson, who with her parents has been part of the Alumni Association’s Albion chapter. “We were all on board with this idea as a way to honor our mom. It’s been a very comforting way of thinking about her.”

See how others are Advancing Albion