Honoring a Friend and His Scholarship Road

An alum leads the push toward the creation of the Vournakis Endowed Legacy Scholarship.

As a kid, John Vournakis understood only too well what it meant to get by with very little.

He had grown up in Albion, the son of Nick and Pota Vournakis, Greek immigrants who opened the popular restaurant Nick’s Lunch on South Superior Street in the early 1940s.

A good athlete but an even better student, Vournakis graduated from Albion High School and then earned a number of scholarships that allowed him to attend and graduate from Albion College. 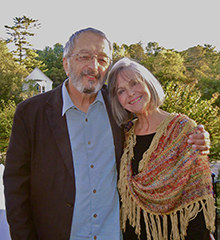 John and Karen Vournakis in 2011, celebrating their 50th wedding anniversary in Vermont.Perhaps that’s why the new John N., '61, and Karen Munro Vournakis, '66 Endowed Legacy Scholarship means so much to John's widow, Karen.

“This will be for students of financial need,” says Karen, whose husband of 56 years passed away in January 2018 at the age of 78. “That's the position John was in. He had the academic background but no money for college. He was fortunate enough to receive the Alfred P. Sloane Scholarship from Albion College and he took that very seriously. It's really quite appropriate that a scholarship in his name is offered to a good student who needs financial aid."

The endowed scholarship was the brainchild of one of Vournakis’ best friends, Charlie Becker, '66, whose roommate at Albion was John’s younger brother, Jim Vournakis, '66. Through Jim, Becker got to know the entire Vournakis family, including John.

“John put himself through Albion on scholarships,” says Becker, who earned his degree in political science with a minor in English and now practices law in Florida. “It was amazing what he knew. And he had an infectious laugh. If you heard his laugh you’d never forget it. He was respected and loved by literally hundreds of people.”

When John died, Charlie decided the best way to honor his friend was by establishing a legacy scholarship in his name, contributing the first $25,000 to get it started.

Karen says she knew nothing of it until she was contacted by the College in March.

“I had no idea,” she says. “It was such a wonderful surprise. [Our son] Christopher and I are very appreciative of Charlie’s efforts to acknowledge John, and he would be very, very pleased to hear this.”

Karen, who grew up in Chelsea, Mich., and is a well-regarded photographer and artist who has lived in Charleston, S.C., for 22 years, remembers as a freshman seeing John, a junior, walk the campus in his letterman’s jacket.

One of her friends and a fraternity brother of John's, Bruce Taylor, '63, offered to set up a meeting between the two.

“I said, ‘No blind dates for me. I need to know who I’m dating,” Karen recalls.

She then did some research and found out that John played football and was president of the student council—and very driven as a student, particularly in the sciences.

“I knew he was not a killer or anything so I decided to go out with him,” she says with a laugh. “We had a good time, and when he walked me back to the dorm he said he had a good time, too, and that finals were coming up and he’d call me early the next semester. I thought, ‘Yeah, maybe it didn’t go as well as I thought.’”

But John did call early the next semester and they began dating steadily. In May 1961, Vournakis graduated with a degree in chemistry, physics and mathematics. Four months later they were married. In 1966, Karen received her degree in art after a three-year delay—brought on by first raising Christopher and then as John pursued his Ph.D. in biophysical chemistry from Cornell University. He then did post-doctoral training at the Massachusetts Institute of Technology and Harvard University, studying molecular biology and genetics.

He would go on to become a biology professor at Syracuse University and then at Dartmouth College, where he founded the school’s Molecular Genetics Center. Later, his career took him to the Medical University of South Carolina as a professor of medicine.

John mixed in business ventures as well. He helped to establish the genetic engineering group at Bristol-Myers; served as senior vice president for biotech start-ups Verax and Genmap; and in 1992 cofounded Marine Polymer Technologies, where he was also vice president of research and development.

Through it all, though, John never lost touch with Albion College. He was a member of the Board of Trustees for nine years and delivered the Alumni Lecture at the 2001 Elkin R. Isaac Student Research Symposium, He and Karen each received the Distinguished Alumni Award (John in 1996, Karen in 2000) and the couple often made it back to campus for Homecoming.

Becker puts it simply: "He was a fascinating guy.”

To make a gift to the Vournakis Endowed Legacy Scholarship, contact Albion College Institutional Advancement at 517/629-1254 or visit advance.albion.edu/vournakis.