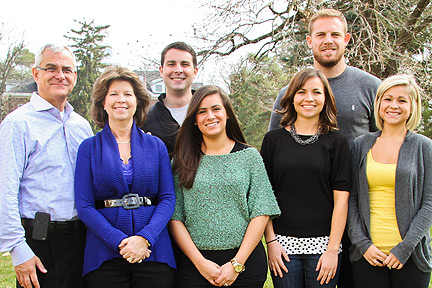 For the Prister family, calling an Albion College degree a "family tradition" is putting it lightly.

With two sets of siblings, three spouses, and two generations of Albion graduates, the Pristers have made it almost automatic.

All three of Jim, '83, and Sue, '81, Prister's children have attended Albion College, including current senior Megan Prister, '13 – the last of three siblings to graduate a Briton.

"It's a life-long connection," says Sue.

It started when Jim Prister, CEO of RML Specialty Hospital, visited his sister, Linda, at Albion College as a high school student. Coming from a smaller school, Jim was at home in a school like Albion.

"It felt comfortable," he says.

For Sue Prister, it was a similar story. Her father, a biochemistry professor at Michigan State University, thought a smaller school atmosphere would suit her better. After touring several schools, Sue saw Albion as the natural choice.

"There was a sense of community and welcoming that we didn't see at other schools," she says. "I said, 'This is where I want to be.'"

Jim met his wife Sue as a freshman, and the two stayed together until Jim graduated. Jim's brother, Tim Prister, '85, ended up at Albion as well.

After college, when they had children, Jim and Sue were more hands-off in influencing their children's college decision.

Jessica (Prister) Benko, '08, the eldest of the Prister siblings, says that was true: she felt no pressure from her parents to attend Albion. She does remember looking through photo albums from her parents' college days, and the Kappa Alpha Theta chants around Christmas dinner from her mom and aunt Linda. But she was not attracted to the bigger schools, and looked instead at smaller colleges – including Albion.

During an overnight visit with a family friend, she attended an Anchor Splash practice and felt a connection with her parents' alma mater.

"The next morning, I woke up and realized, 'Albion is the place for me,'" Jessica says.

"As uncomfortable as it is to send your kids to college, Albion was always comfortable," Sue says. "I knew Jessica would do well in this environment. I had a great experience, and I knew she would, too."

Jessica, a communication studies major at Albion, is now an executive assistant at Saint Joseph Regional Medical Center. She married Zach Benko, '08, a teacher and coach at Northwood High School in Nappanee, Indiana. The two met at Albion, dating their first year and engaged by their senior year.

Jamie Prister's introduction to Albion came thanks to visiting his sister, Jessica.

"We had an awesome weekend," he says. "I really liked the atmosphere."

For his second visit, Jamie had a chance to meet Albion's soccer team, and play a pick-up game in the Dow field house. Continuing on with soccer at college was something that appealed to him. The entire Albion experience – his sister ahead of him, the rigorous academics, his family's success after graduating – felt so familiar that the College was the only place he applied.

"I went all-in. And I got in, so that's good," he says with a laugh. "My parents said, 'Apply wherever you want,' but Albion's educational reputation came first."

Jamie met his wife, Danika (Varady) Prister, '10, in ceramics class – but Danika's introduction to the Prister family came earlier, when she was teammates with Jessica on the Briton golf team. She remembers Jim and Sue taking the team out to dinner. She also remembers Jamie's antics in ceramics class with several of his friends.

"They were talking about ridiculous clay things," she says. "But their clay-making skills were not so good. It was entertaining."

Perhaps meeting her future in-laws before her future husband was a sign. Danika said she kept bumping into Jamie, including at his Sigma Chi fraternity house.

"We gravitated toward each other," she says.

Today, Jamie serves as an account executive at Hubbard Broadcasting while Danika pursues a master's degree in art therapy at the Adler School of Professional Psychology.

While she didn't feel any pressure from her parents, Megan Prister's older sister and brother gently persuaded her to come to Albion.

Megan visited Jessica during a siblings weekend at Albion, and Jamie during high school. When it came to her college search, Megan applied to two schools, and was accepted to both – setting up a tough decision for someone who had thoughts of breaking the Prister family tradition.

"I always knew that I would at least apply to Albion, especially once Jessica and Jamie ended up here," Megan says. "Now looking back on it, I couldn't picture myself anywhere but Albion."

Now a senior, Megan designed her own major in business communications, and isn't shy about talking up the benefits of Albion.

"The biggest thing I tell people is that I love the small school atmosphere and being able to have one-on-one time with professors if you need it," she says.

The Pristers are still connected with Albion. Jim and Sue return almost every year for Homecoming. Jessica is still friends with her first roommate, and meets up with her Kappa Alpha Theta pledge class each summer.

"And we came back to Albion because our kids were here," Jim says. That will hold true until Megan graduates this spring, and probably after that.

Apart from his children, Jim has mentored Albion students, and returns to campus to speak with the Gerstacker Institute. The Pristers are still close with the friends they made at Albion – and their children's friends. The connection to their alma mater is deep as well as wide.

"All of this solidifies our view of Albion," Jim says.