About the Isaac Research Symposium 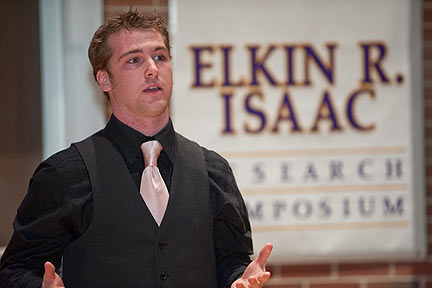 The purpose of the Elkin R. Isaac Student Research Symposium is to honor excellent student research, scholarship, and creative activity. The participants are nominated by their faculty sponsors after having participated in independent research that results in the significant synthesis of new knowledge. The research must have been performed under the direct supervision of an Albion College faculty member, or in a College-approved off-campus program.

By 1999, the Symposium had grown to the point that concurrent sessions were required for 62 platform and poster presentations. 1999 also saw the addition of the Symposium keynote address, which has featured Wade Davis, Stephen Jay Gould, Doris Kearns Goodwin, Kurt Vonnegut, Salman Rushdie, and Gloria Steinem.  In 2000, the Research Symposium was first held on the same day as the College's Honors Convocation.