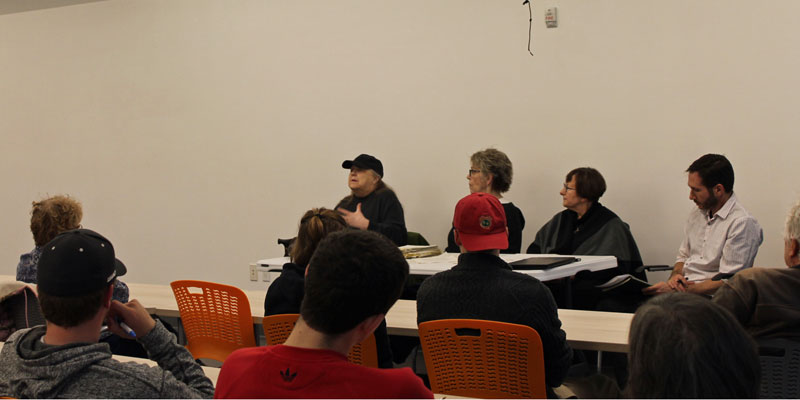 A watershed chapter of Albion College's history inspired an audience of colleagues, students and friends, as professors Barbara Keyes, Mary Collar and Judy Lockyer presented the 2018 Anna Howard Shaw Keynote on March 27. Along with memories of the campus climate in the 1970s and 1980s, the three recalled the establishment of women's studies on campus and its impact, then and now.

Psychology professor Barb Keyes arrived on campus in 1975, when the faculty consisted of 100 men and 23 women. She recalled that nine departments had no female faculty, the Home Economics Department had no male faculty, and only the Physical Education Department had a close-to-equal distribution.

As a young professor, Keyes worked on a Great Lakes Colleges Association (GLCA) committee that was founded to encourage women's studies programs at the member schools. But while women's issues gained attention from an academic standpoint, administratively they were still a work in progress. Keyes received two weeks' leave for the birth of her first child, "because we didn't have maternity leave," she said. "We didn't have a lot of choice." 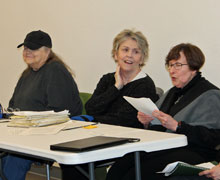 Collar, who arrived at Albion in 1977, joined an English Department that had no tenured or tenure-track female faculty. "It didn't seem all that odd," Collar recalled, noting that she had only one female professor during graduate school. She added that the College in '77 announced that, for the first time, women were 50 percent of the new tenure-track faculty—but again, still barely one-sixth of the entire cohort.

Lockyer recalled one of her first English faculty meetings in 1985, when she handed out copies of an article about integrating feminist works into English curricula. "I had some reaction," she said obliquely. "At the time, I naively thought, 'Surely, they'll be interested in this.'"

Lockyer noted the contributions of many former and emeritae professors and staff members, led by theatre professor Helen Manning, who, it was feared, might corrupt male students if she taught while pregnant. "These women informed a lot of what came to be," Lockyer said, also naming Robina Quale-Leach (History), Fran Lucas (Psychology), Kitty Padgett (Career Development), and former faculty and staff Catherine Lamb (English), Betsy Taylor (Anthropology and Sociology) and Karen Neal (Registrar).

Lockyer further noted that the Women's Studies Committee realized a clear curriculum was essential to establishing a campus program. Among students as well as faculty and administration, many saw women's studies courses as only for women, and there was often ridicule of male students who took such courses. As the committee worked, says Lockyer, it became clearer that women's studies weren't "just" for everyone—they could, and should be, "required" for all students.

It was a progressive idea, but Collar recalled it was also a lot of work that had to be done quickly. Criteria were developed for designing these new courses—and as importantly, faculty had to be encouraged to design them. Then, if each student had to take at least two courses for graduation, there had to be enough courses to fill this need, carefully distributed into the course schedule.

The committee figured it out—"and in the process Albion became a model for other institutions," Collar said, noting that Harvard University was one of many schools to use Albion as a model for its own curriculum reform.

"If I look back and say, 'Where did my being here make a difference to what the College does?' this is something that still stands out to me today," Collar said.

At the end, each participant reflected on the role of category requirements, 27 years after they helped institute them.

"If you took away the category requirement, do you think you would be getting the knowledge at the level you need?" Collar asked. "We always saw what we were doing as part of a liberal arts education. You couldn't really be educated if you hadn't thought through these issues."

"If you look at our culture, you could say there are a whole lot of things left to be learned by a lot of people you'll be working with," Lockyer commented. "A lot of thinking has gone into this, but it has totally missed a large part of our country."

"One thing the faculty is constantly thinking about is how to do a better job with curriculum," Keyes stressed. "That's what leads to change."