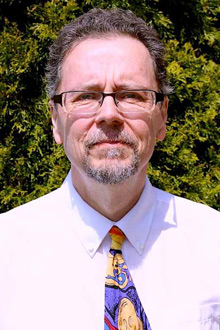 Mark is the Scenic and Lighting Designer for the department. He teachers Introduction to Theatre, Introduction to Theatrical Design Technology and Theatre History, Scenic and Lighting Design, and Stage Management. He directs at least one production and coordinates the Student Directed Festival each year. Mark has been an active judge for the MIFA One-Act Competition since 1993, and he has also judged and presented workshops for the Michigan Thespian Festival since 1999. He was the Technical Director in the Department of Theatre at Michigan State University for nine years, and also served as the Head of the Technical Theatre program for 14 summers at Camp Laurel in Readfield, ME. He has been an actor in more than 75 productions and has done teaching, directing and design work at Olivet College, The Thunder Bay Theatre and Greast Escape Stage Company.