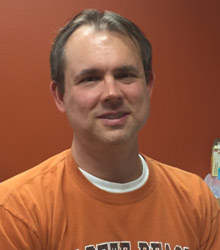 Drew Christopher has taught at Albion College for 16 years and understands only too well that the only constant is change.

The psychological science professor laughs when asked about what has changed in his years at the College.

“I don’t know if the students have changed or if I’ve changed,” he said. “I get older each year but the students stay the same age.”

But if there has been one other constant, it’s been Christopher’s ability to reach and teach his students.

He will receive his award at the SPSP annual conference on March 1 in Atlanta, Georgia.

“As much as I can, I try to meet students where they are,” he said of his teaching style.

He uses writing skill as an example.

“For students doing wonderfully, I try to push them to do more, to see how good they can get,” Christopher said. “Those who struggle, I try to help them take strides to reach that next level of quality. Making a presentation is really important, orally or written.”

As for the changes over the years, he sees students who have grown used to the highly structured learning brought on by standardized testing, and who come to college and discover all too quickly that learning comes in different ways.

“In my Psychology 101 class, for example, I try to teach them that there are oftentimes multiple ways to solve a problem,” Christopher said.

His award this year was designed to recognize excellence in teaching and mentoring among faculty at colleges and universities that do not have Ph.D. programs in social psychology and/or personality psychology.

Christopher said the fact the nomination came from former students means as much to him as the award itself.

A social psychologist with a number of research interests including work ethic, risk-taking and materialism, Christopher has published dozens of journal articles in collaboration with students and colleagues. He has won numerous teaching awards and serves as editor for the journal Teaching of Psychology.

A native of New Orleans, Christopher is a graduate of Stetson University, holds an M.B.A. from Southern Methodist University, and has master's and doctoral degrees from the University of Florida.