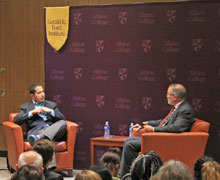 Heffner is the twentysomething host of PBS' "Open Mind," a show created and hosted by his grandfather, Robert Heffner, 60 years ago. In keeping with his "Open Mind" format, Heffner's presentation was question-and-answer form, with Ford Institute Director Patrick McLean serving as interviewer.

Heffner noted that civil discourse today is concentrated, and often degraded, through social media. He had harsh words for social media giants for their reluctance to prevent violent and manipulative content on their sites.

In Senate hearings held earlier this year regarding the responsibility of social media providers for the content on their sites, Heffner said, "It was the first time in our country that the CEOs were not responsible. There is an incestuous relationship between politicians and the corporate community such that it took Russian troll farms, that were selling discontent, for them to wake up." He continued: "All these politicians have Facebook and Twitter accounts, they want to be followed by as many people as possible and use that data to win their next elections."

Heffner hooted that the easy spread of disinformation, the rise of hate groups, and economic and political divisions are also contributors to the difficulty for Americans to talk civilly to one another. He concluded with what he sees as a bright spot for truth and discourse:

"I don't believe it's an 'elite' notion; it's a factual notion that educational institutions undertake research that can be trusted," Heffner said. "As the host of a show that interviews a lot of academics, I very much believe in that scientific process and believe there is a rigorous process through which data are made available.

"The goal should be to inform and engage to some pro-social end," Heffner added. "I think we've been lost in a dialog between 'civic' and 'civil' for too long. You need awareness of the ABCs of citizenship to engage in civic life, but you also need a prerequisite of civility. It doesn't mean you can't engage in robust and challenging and controversial speech. But we're at a crucial moment in our society when we determine where the civil guardrails are."

The Aldrich Speaker Forum honors the life and memory of David Aldrich, '75, a trial lawyer and chair of the Litigation Practice Group at Foster, Swift, Collins & Smith P.C., where he worked from 1978 until his untimely death in 2006.