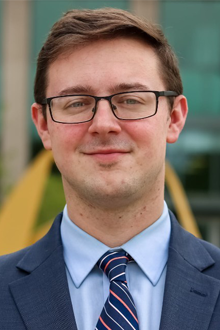 A native of Pottsville, PA, John Johnston began serving as a band director at Albion College in 2021. Prior to his time in Albion, John obtained his M.M. in Wind Conducting at West Chester University of Pennsylvania, where he was fortunate to conduct with all bands on campus, as well as being heavily involved with the design and instruction of the West Chester University "Incomparable" Golden Rams Marching Band and WCU "Sixth Man" Basketball Band.

John taught in the Pampa ISD (Pampa, Texas) as an associate band director, team-teaching 6-12 Band. The team at Pampa together served approximately 400 music students a day, and John in particular served as director of jazz bands, worked with a number of the concert ensembles, and was heavily involved with coaching students participating in Texas Solo & Ensemble competitions. Pampa ISD consistently was awarded Division I and Sweepstakes awards across many of their bands.

Outside of the academic realm, John continues to pursue educational opportunities. He currently serves as artistic director of the Pennsylvania Chamber Winds, a chamber ensemble seeking to advocate for diverse composers and explore chamber opportunities for the public classroom in PA. John also served on the instructional staff of the Jersey Surf World Class Drum Corps from 2016 through 2021.