Albion College’s professor of piano, David Abbott, may not have the answers to the challenges, conflicts and uncertainties of today’s world. But he and adjunct music professor Anna Khalikova offered a place to start.

On October 8, playing on the football field in an all but empty Sprankle-Sprandel Stadium, with Abbott on piano and Khalikova playing violin, they performed a 45-minute concert titled, “Brits, Beethoven and Black Lives Matter.”

“With all the issues we see,” Abbott said simply, “we need to communicate through music.” 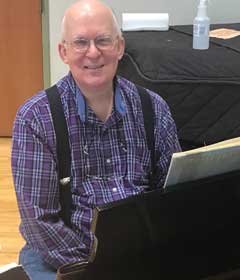 Dr. Abbott pauses during a rehearsal.Originally, the plan was to perform in front of socially distanced students, staff and faculty in the bleachers in an effort to bring a little normalcy to campus. But the world as we know it even turned those plans upside down. Late the previous week, President Mathew Johnson temporarily suspended non-essential social gatherings out of an abundance of caution regarding COVID-19 on campus, which put the performance in jeopardy.

But Abbott and Khalikova got the OK to hold the event in the stadium, and while there was no audience to speak of, they did perform for a Facilities and piano-moving team along with IT staff and a film crew, all of whom helped with many logistics including shielding microphones from the wind as well as filming and recording the soundtrack, among other duties.

“There were still people there, so I just played to them,” said Khalikova, an Uzbekistan native who is in her second year as an Albion adjunct professor. “Usually it’s kind of hard to play outdoors because the acoustics are different, but thankfully the acoustics at the stadium were good. I enjoyed playing there. There were a few people there who were helping out and when the performance was done, they applauded. It was nice.”

It was a new experience for a veteran performer like Abbott, too.

“It took a kind of concentration I never experienced before,” he said. “But the show goes on and you do it.”

And it did. The program was recorded and is available to watch on the College’s YouTube channel.

Asked if he’d try to put the performance on again, Abbott smiled.

“So many people did a great job of helping me to pull this together,” he said. “That was a big ask and I don’t want to press my luck.”

But the music endured, as it always does. 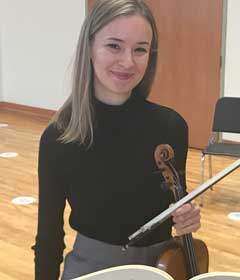 Khalikova is in her second year at Albion.The duo played a movement of a violin sonata written by Ludwig van Beethoven as well as music by African American composers.

The theme melded the racial issues of the day, including in the sonata, which, Abbott said, was written by Beethoven for a violinist named George Bridgetower of European and African descent. Bridgetower gave frequent performances for royalty across Europe around the turn of the 19th century, eventually becoming a protégé of the Prince of Wales.

“After his death, he was intentionally skirted off to the sidelines of history because of his race,” Abbott said. “But Beethoven really liked him and greatly respected him as a violinist.”

“Playing with Dr. Abbott was such an enjoyable experience,” Khalikova said. “He’s such an easy person to work with.”

And while the performance did not come together the way Abbott had hoped, he believes the music in a small way can help bring a sense of normality to the campus amid a pandemic during a time of heightened racial tension.

“I thought it went very well,” Abbott said. “It was an unusual thing but we wanted to bring music to people. It’s a musician’s privilege to use this universal language of music to ennoble our spirit and transcend to a higher level of communication. It seemed like the right thing to do and I think Beethoven would have approved.”