For six new graduates, a successful senior year in a College Living-Learning Community 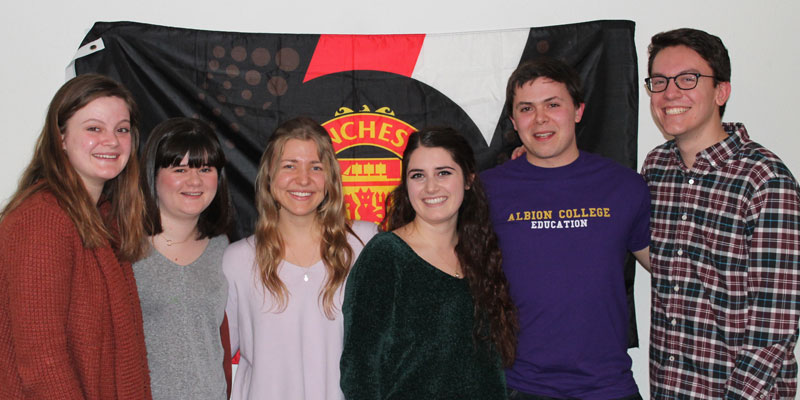 It's early spring in Munger Place, and tortilla is not only a favorite dinner in Albion's Spanish Living-Learning Community (SLLC), but a perfect illustration of what the SLLC has been all about. For starters, tonight's Spanish tortilla doesn't contain wheat or corn flour, and other than its shape, looks nothing like the Mexican staple.

"Spanish tortilla is eggs cooked with onions and potatoes," explains SLLC member Victoria Ruprecht, '18. "It's kind of like a quiche without a crust."

Welcome to Albion College's Spanish Living-Learning Community, created by six seniors who used Albion's LLC program during the 2017-18 academic year to simultaneously share a common language and diverse experiences related to it. It was something of a student-driven outgrowth of the Modern Languages and Cultures Department’s Fiske House, the small size of which limits participation to one semester per student. 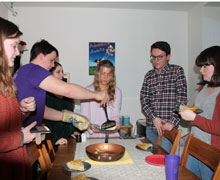 The students in Albion's Spanish Living-Learning Community graduated May 5.

"I really enjoyed living in Fiske House," says Spanish LLC founder Zachary Hall, '18. "Applying for our own LLC seemed like a way we could continue that experience."

As the SLLC included no native speakers, and its members had off-campus experiences in four different countries, "We mostly speak Spanglish to each other," says Madison Minardi, '18. "Slang and cultural expressions are different in different places. But it's cool to learn them by just talking to each other.”

"In Spain, people say, 'vale,' which is how they say 'OK,'" adds Kailey Henderson, '18. "However, that’s not how it’s used everywhere. In Argentina, if Maggie were to go about saying, 'vale,' it wouldn’t have the same connotation as it does in Spain."

All agree that the casual and constant sharing carried great educational value. "I didn't get to study abroad, but living here feels a little bit like an exchange experience," says Hall. Elliot Brinker, '18, a French and Spanish major who studied abroad in France, says, "It's nice to have the focus on Spanish, the way you use it as an everyday thing."

It rubbed off on the group's one non-Spanish major as well. "I'm learning so much Spanish, by living here and by helping with Spanish lessons at Kids at Hope, which Victoria has been helping coordinate since she started at Albion," says Minardi. "Kids at Hope is an after-school program for younger students in the Albion community, and Victoria's been doing weekly Spanish lessons for four years. I love working with the kids and they love learning Spanish."

Living together also provided more opportunities to study together—a valuable commodity given everyone's busy schedules. After all, it's a lot easier to start—or finish—homework late at night, or early in the morning, when someone else is doing it, too. Or, "watching a foreign-language movie is a lot more fun when someone else can enjoy it with you," says Henderson.

“Being able to learn, study and cook together in this community has been great," says Hall. "We’ve all learned so much through the Modern Languages and Cultures Department, and having the opportunity to continue this education outside of the classroom has been something we never expected."

The establishment of Albion College's Living-Learning Communities was part of a significant fall 2015 gift by Gary Noble, '57, and Peggy Noble that refurbished and revitalized Munger Place. Read more