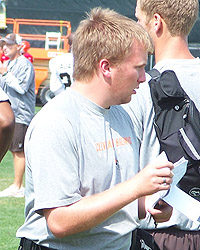 Tyler Floyd was the second member of Albion's athletic training education program to intern with the Cleveland Browns.While many followed reports on the National Football League’s lockout for information about when to begin preparing for their fantasy draft, Albion College student Tyler Floyd, ’12, was wondering about the status of an internship to prepare him for his career.

A portrait of Charlotte Duff from the 1960s.Charlotte Duff, professor emerita of physical education, passed away Oct. 3 in Mt. Vernon, Iowa.

Duff, who joined the Albion staff in 1956, was hailed for developing a sports science track for the physical education major and serving as chair of the department for 15 years from 1975-1990. In addition to her 34-year teaching career at the College, she served as longtime coach of Albion’s tennis and field hockey programs, and she also coached the women’s basketball and tennis squads, gaining induction into the Athletic Hall of Fame in 1990.

It takes less than an hour to drive from the Parma home where Stephani Croad was raised to Michigan Stadium. The 2009 Albion College graduate, however, has crossed the boundaries of one of college athletics’ biggest rivalries as she will serve as a strength and conditioning intern for Ohio State University’s football program through December.