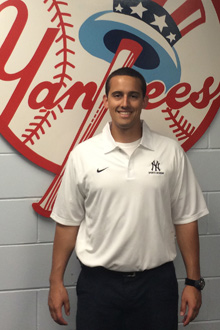 Anthony Moon, ’13, is starting his career in professional baseball this spring, though it’s a different path than what he may have imagined as a young player growing up near Kalamazoo.

A graduate of Albion’s athletic training education program and a former catcher for the Britons, Moon reported to the New York Yankees’ spring training complex in Tampa, Fla., in January to begin working with the rehabilitation protocol for individual players. He’s currently working with the 160 minor leaguers at spring training, which started in earnest last week, and then will work as an athletic trainer for the Staten Island Yankees, the organization’s short-season ‘A’ level affiliate.

Having the flexibility to start the job shortly after the new year and contacts between Albion’s athletic training faculty and the Yankees were essential in Moon’s breakthrough into professional baseball.

“It was a matter of being in the right place at the right time,” Moon said. “I’ve always been trying to get a job in baseball and applied for an internship. Professor Scott Michel is friends with the director of rehabilitation for the Yankees. There happened to a vacancy in Staten Island and I could not be more excited.”

Working with the Yankees organization is not Moon’s first exposure to professional sports. He interned with the Cleveland Browns during training camp the summer before his senior year at Albion. The difference, however, is that his work in the minor leagues will involve more than athletic training. He’ll also serve as the traveling secretary, establishing itineraries, rooming lists, and doling out per diem for the team that competes in the New York-Penn League and make stops in towns in Connecticut, Maryland, New York and Pennsylvania.

Moon, who expects to complete online courses for a master’s degree in rehabilitation science from California University of Pennsylvania in the summer, said the work is the perfect opportunity to practice what he’s studying.

“The school and professional work go hand-in-hand,” Moon said. “When work started in January, a typical day would include taping and stretching in the morning and then going out to practice to watch rehabilitation in the afternoon. It’s nice having a baseball background because I know what the players need to be game-ready.

“I expect spring training to be crazy,” he added. “Those will be longer days, but I don’t think it will be any crazier than when I was with the Browns, but we’ll have to see how professional baseball is different.”

Of course, Moon’s ultimate goal is to stick with professional baseball all the way to the major leagues. With just 30 teams, however, he'll have to work his way up the ladder.

“There’s only a small group in the profession,” Moon said. “I’m getting in at the ground floor. You don’t see people skipping steps [up the ladder to the major leagues]. It’s a matter of putting my head down and waiting for opportunities.

“I’m excited and nervous [to move to Staten Island once the season begins],” Moon added. “I’ve never lived in a big city. I’m sure New York is faster and busier than anything I’m used to. I hear we have the opportunity to tour Yankee Stadium one day and I can’t wait to see the inner workings of a major league ballpark.”