How Wesley and Leslie Met Chloé Zhao & Her Words of Wisdom 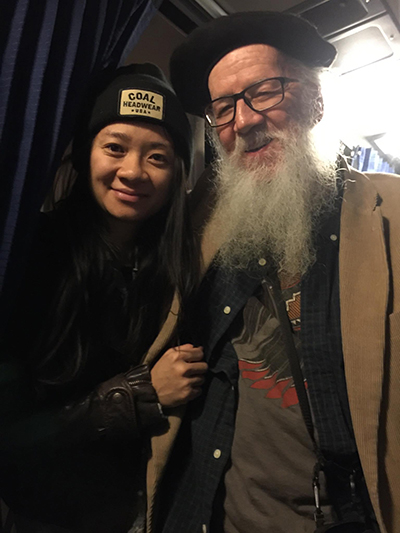 One of the delights of Amtrak travel is the serendipity of the seating in the dining cars. Amtrak fills the tables of four with whomever arrives. For Leslie and me, that meant we would get to know new people at breakfast, lunch, and dinner. As fate would have it, at one of our dinners, we were joined by Chloé Zhao. She was interested in us and she filled us in on her film projects which centered on the Pine Ridge Indian Reservation in South Dakota. After our wonderful conversation, we felt like we were no longer “strangers on a train.”

We said goodbye at Los Angeles’ iconic Union Station, which, poetically, was the location for this year’s Academy Awards program.

On Sunday, April 25, when Chloé Zhao won the Oscar for best director (“Nomadland” also won best picture), she was only the second woman to win best director; she was the first woman of color and the first of Asian descent to win. I teach a history class entitled American Dreams &amp; Realities. Chloé Zhao’s story is an American dream story and her films blend American dreams and realities.

Born Zhao Ting in Beijing, China, in 1982, at age 15 she ventured abroad to study in England. She told Vogue that she was sent by her parents to “one of those Hogwarts boarding schools.” Subsequently, her dreams of living in the United States were realized. She completed high school in Los Angeles, graduated from Mount Holyoke, a liberal arts college, and studied film at New York University, where Spike Lee was one of her professors. Drawn to the American West, Zhao’s films have focused on the Great Plains, Pine Ridge and the West. One account “likened ‘Nomadland,’ with its soul-stirring empathy for the disenfranchised, to a modern-day ‘Grapes of Wrath,’” a film that traces the journey of the Joad family along Route 66, a journey that students of my America in Crisis class experienced each semester. Chloé Zhao is a brilliant artist and plans for her next project have already been announced. Stay tuned.

Leslie and I were moved by Chloé Zhao’s Academy Award acceptance speech for best director. Her words:

“I’ve been thinking a lot lately of how I keep going when things get hard. I think it goes back to something I learned when I was a kid.

“When I was growing up in China, my Dad and I used to play this game. We would memorize classic Chinese poems and texts, and we would recite them together and try to finish each other’s sentences.

“There’s one that I remember so dearly, it’s called the Three Character Classics. The first phrase goes … ‘People at birth are inherently good.’ Those six letters had such a great impact on me when I was a kid, and I still truly believe them today.

“Even though sometimes it might seem the opposite is true, I have always found goodness in the people I met, everywhere in the world.

“And this is for you. You inspire me to keep going.”

Chloé Zhao’s acceptance speech inspired Leslie and me. We hope her words resonate with readers of this post.