The April 28 news of the passing of Judge Damon Keith was personally resonant and a reminder of his connections to Albion College. 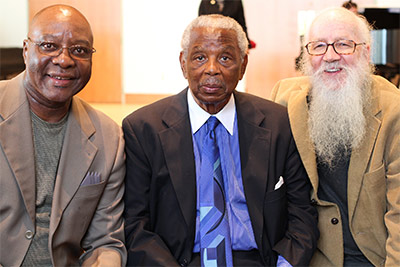 Judge Damon Keith (center), flanked by Bob Dunklin (left) of the NAACP Albion Branch and Albion College history professor Wes Dick in September 2012, when Keith gave the Stoffer Lecture at Fall Convocation.Participants in the fabled Great Migration, Damon Keith’s parents traveled from Georgia to Detroit, where his father was employed for $5 a day at the Ford River Rouge Foundry. Damon, grandson of slaves, was born in Detroit on July 4, 1922 and attended integrated schools in Detroit, but never had a Black teacher.

His father was determined that Damon attend college, so he enrolled at West Virginia State College, a Historical Black College. He graduated in 1943, amid the Second World War, and was drafted into the segregated United States Army.

His journey took him to the most famous Historical Black law school, Howard University in Washington, D.C., the alma mater of legendary civil rights attorney Thurgood Marshall. Keith, along with his Howard classmates, watched Marshall argue cases before the United States Supreme Court. Keith received his law degree in 1949, and slowly emerged as a rising star in the legal field.

He was appointed to the U.S. District Court for the Eastern District of Michigan by President Lyndon Johnson in 1967 and appointed by President Jimmy Carter to the U.S. Court of Appeals for the Sixth Circuit in 1977. As Judge Damon Keith, he issued landmark decisions that put him in the pantheon of judicial greats.

Because of his remarkable life, Albion College, under President Peter Mitchell, bestowed an honorary doctor of humane letters on Judge Keith at the Martin Luther King, Jr. Convocation in Goodrich Chapel on January 13, 2005. President Mitchell invited me to present Judge Keith for the honorary degree with the words: “During more than 40 years as a federal … judge, Damon Keith has demonstrated an unwavering commitment to equal justice, under the law, for all citizens. He has made landmark decisions addressing … sex discrimination, affirmative action, school desegregation, urban renewal, and due process. Among his many important rulings is the ‘The Keith Decision,’ which found President Nixon and Attorney General John Mitchell’s use of warrantless wiretap surveillance to be in violation of the Fourth Amendment.”

“The Keith Decision” case was titled United States v. Sinclair and focused on John Sinclair, who attended Albion College, and had gone on to become a founder of the White Panther Party and a radical resister to the Vietnam War. During his 2005 visit, Judge Keith spent time with Albion College students at the Black Student Alliance's James A. Welton House.

Judge Keith’s contributions to the law, to Detroit and to society continued to grow, and Albion College invited him to present the Stoffer Lecture at the Fall Convocation in 2012. President Donna Randall invited me to arrange for transportation for Judge Keith from Detroit to Albion and back to Detroit. Robert and Mae Ola Dunklin, Albion NAACP and community leaders, joined me in what proved to be a delightful experience.

We did not give the Judge much rest on the trip to Albion, peppering him with questions about his historic life and about the current state of the world. At lunch, Judge Keith met Albion College students, faculty, trustees and community citizens. This was followed by an engaging lecture in Goodrich Chapel. Then it was time for the return drive to Detroit, which culminated with an invitation from Judge Keith to come up to his apartment, a veritable museum of his encounters with the greats of the 20th and 21st centuries. The walls were lined with photos of Damon Keith with Martin Luther King, Jr.; Rosa Parks; Nelson Mandela; Presidents Kennedy, Ford, Carter, Clinton and Obama; and many more dignitaries.

In June of 2016, Robert Dunklin and I were reminded of our magical time with Judge Keith when we went back to Detroit, along with MarKeese Boyd, ’19 (and a Build Albion Fellow), to witness the premiere at the Detroit House of Opera of the documentary film: Walk With Me: The Trials of Judge Damon Keith.

The impact of the film on the audience was clear and Judge Keith was present to respond to questions. It was an evening to remember.

Judge Keith’s life encompasses so much of America’s story, both the American Dream and the American Nightmare. At every stage of his life, Damon Keith faced racism and prejudice. In Walk With Me, Judge Keith recalled that at age 69, as national chairman of a Williamsburg, Va., judicial conference on the Bicentennial of the Constitution, he stepped outside the hotel and was mistaken for a parking attendant: “’A white man drove up,’ and said, ‘Boy, park my car.’”

Despite the obstacles, indignities and insults, Damon Keith became a “Crusader for Justice” and a "Beloved Icon.” It was an honor to walk with Judge Keith. I am proud that he became part of the Albion family.