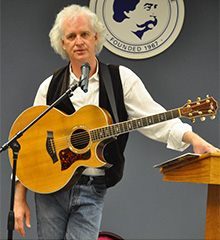 The 2011 film explores a dramatic episode in the history of Calumet, a mining city in Michigan’s Upper Peninsula. On Christmas Eve 1913, the families of striking copper miners gathered in Italian Hall. Someone yelled “Fire!” In the panic, 74 people died, 59 of whom were children. There was no fire. The film explores whether the cry of fire was a tragic error or a deliberate malevolence.

Since earning a doctorate in U.S. labor history at the University of Minnesota, Halker has spent nearly 40 years as a professional musician and scholar. His five-volume audio anthology of Illinois folk music earned him a 2011 Archie Green Fellowship with the American Folklife Center at the Library of Congress, where he did scholarship on the Chicago iron workers who built downtown Chicago. Along with keeping an annual U.S. and European touring schedule, Halker currently serves as director of Company of Folk, an organization that promotes folk and ethnic arts in the Upper Midwest through research and public programs. During the 1980s, he was a visiting member of the Albion College History Department.

The Bohm Theatre is located at 201 S. Superior St. in downtown Albion. This program is free and open to the public. Please contact the History Department at 517/629-0396 for more information.