Professor Thomas Wilch adds COVID-19 pandemic to syllabus; student says, “This is historic stuff … I’ve taken a natural-disaster class while I was in a natural disaster.” 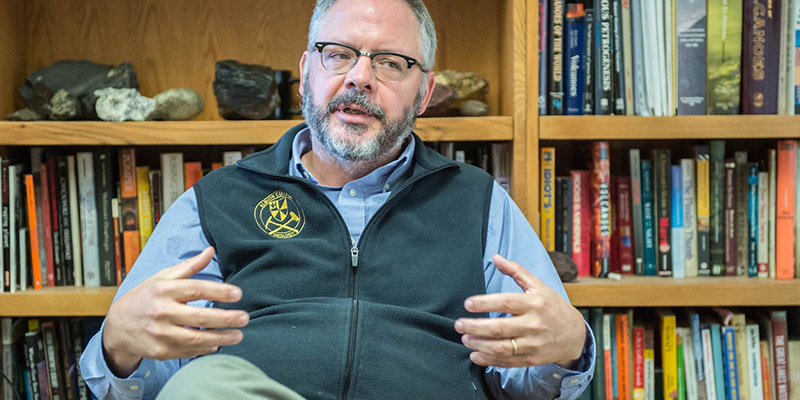 “We’re all experiencing this natural disaster together,” says professor Thomas Wilch, adding, “This will be included in the course in the future.” Wilch joined Albion College's Geological Sciences faculty in 1998. (Photo courtesy Battle Creek Enquirer)

Geological Sciences professor Thomas Wilch has been teaching his Natural Disasters course for years, but this spring semester the class has taken on a very different, and all-too relatable, feel.

“It is,” Wilch said simply, “a teachable moment that every person on the planet is implicated in.”

These are strange and difficult days not only around the Albion campus but throughout the state of Michigan, the United States and the world.

The novel coronavirus has swept across the globe, sickening hundreds of thousands, killing tens of thousands and sending much of the planet into quarantine in an effort to blunt its spread.

That includes the closing of businesses and college campuses across the country, including Albion, where face-to-face learning was suspended in mid-March in favor of online instruction.

Wilch’s class, which includes some 30 students, has not only moved to the digital realm but to new subject matter as well. Instead of volcanoes, hurricanes, earthquakes and tornadoes, the natural disaster is a viral pandemic.

And it is no abstract topic of study.

Teaching a Topic So Close to Home

Wilch altered his course as the semester progressed to include discussion of COVID-19, the highly contagious viral disease that, at its worst, can lead to severe respiratory distress and death.

It swept in from overseas with just a few months’ warning, has overwhelmed medical services in many U.S. cities, and shaken many Americans to their core.

And if this wasn’t the definition of a natural disaster, Wilch wasn’t sure what was. He saw this pandemic as, yes, a teachable moment but one that had to be approached with care, tact and understanding.

In a writing assignment, he offered students the opportunity to compare the COVID-19 disaster to geophysical case studies that they have been learning about all semester. Wilch gave them the option of this topic among several.

“Everyone’s very isolated,” he said. “Most students are off campus and it’s a very different learning experience. We’re all feeling it very significantly and feeling it every day. Some want to write about it and some don’t.”

But Wilch also understood that while teaching remotely would be difficult enough, teaching a topic that’s hitting so close to home would be even tougher.

Victoria Smith, ’20, a sociology and French major from Grosse Pointe Woods, Mich., said the direction of the class didn’t really change until the final weeks before the campus closed because, by then, everyone knew what was coming.

“We’ve actually stayed kind of close to our schedule,” she said. “One day a week we go on Google Meet and talk. The rest of the time is full of slides and videos. I just think it’s so ironic that we’re facing a biological natural disaster while taking a course on natural disasters. It’s really wild to see it in motion.”

And though the topic has moved from such short-duration, violent disasters like earthquakes and hurricanes, Wilch believes some of the same lessons can be taught when it comes to the current crisis.

“This is different in that it’s global and slow-moving,” Wilch said. “Those are fundamental differences. Most natural disasters are much more constrained in time and space. But the similarities to ‘conventional’ natural disasters are striking: response and recovery require preparation and leadership; economically disadvantaged people are disproportionately affected; there are huge economic costs; people suffer physically and psychologically; and there is a high level of uncertainty during the crisis.”

This wasn’t a direction Wilch was planning when the semester began in January, but the circumstances required that the coronaviruus and COVID-19 be incorporated into the course.

“We’re all experiencing this natural disaster together,” said Wilch, adding, “This will be included in the course in the future.”

And for Smith, it’s a subject that will stay with her long after graduation.

“This is historic stuff,” said Smith, a self-described “people person” who admits studying from home has added a level of anxiety that she shares with many of her classmates. “It’s made me realize a lot more about our society than if I hadn’t taken the class. It’s changed the way I’ve thought about our dealing with natural disasters. I’ve taken a natural-disaster class while I was in a natural disaster, and I bet that’s not something a lot of people can say.”