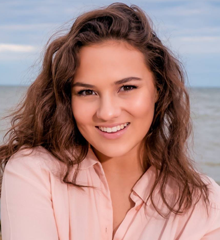 She has completed two internships during her time at Albion College. Last Spring, she held an FSO Assurance Internship with Ernst & Young in Minneapolis. This Fall, she's off-campus with The Chicago Center completing a General Management Internship with Victory Gardens Theater. Following graduation, Shea will be completing a Master of Accounting at the University of Michigan before starting with Ernst & Young full-time in the Fall of 2022.

"Albion has given me the opportunity to pursue every interest I've ever had — and supported me in doing so. Majoring in two completely different subjects, I was really dependent on being able to communicate and form relationships with my professors.

The relationships I formed led to conversations that broke down what my unique interests are and what my future career path could look like. At the end of my freshman year, I told Professor Carlson that one day I wanted to produce Broadway musicals. Four years later, I've completed an interdepartmental course of study, held two competitive internships, and feel genuinely prepared to pursue my dream job. I think that's what they call the Albion advantage…"