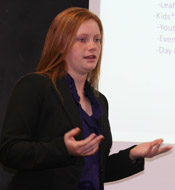 Katie Blumberg gestures while making her final presentation in class.Academics are an essential part of the everyday life of a Division III athlete. But it’s not every day that athletes are given the opportunity to enter their surrounding community and take a hands-on approach to their learning.

Albion College economics and management professor Vicki Baker has spent her academic career studying the decisions individuals make in the workplace. In a paper recently published in Personnel Psychology, Baker and her colleagues from the London Business School, Cornell University, the University of Michigan, and Pennsylvania State University developed a measure to predict unethical behavior.

When Michael Brown, ’87, was a student at Albion College, creating a brochure for Albion’s Downtown Development Authority put him on the path that led to his current position as interactive director with Full Circle, a marketing and interactive agency in Grand Rapids.

Nearly 25 years later, Brown’s career has completed the full circle. This time, he’s mentoring a group of economics and management majors in a consulting project as the city of Albion evaluates the redesign of its website. In a management course taught by Vicki Baker, the students have broken into five teams working with Brown.

Teamwork and preparation paid off for Albion's "Fed Challenge" team, as the group took an honorable mention in the national College Challenge hosted by the Federal Reserve on November 29.