For E&M's John Carlson, Teaching Accounting Doesn't Have to Be Taxing

John Carlson has always been a numbers-crunching kind of guy. But for the Albion College economics and management associate professor, who teaches accounting with a specialty in taxes, perhaps the most significant number in his life these days is 57. 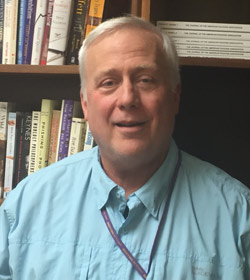 John Carlson will receive the Accounting Teaching Excellence Award from the Michigan Association of Certified Public Accountants October 3 in Novi.
That’s the age Carlson was in 2012 when, at an age when many people are figuring out their Social Security in anticipation of fast-approaching retirement, he was getting his Ph.D. at the University of Cincinnati and, soon after that, embarking on a new career as a college professor at Albion.

“I guess you’d call it a midlife crisis,” said Carlson, who spent much of his career as a corporate accountant in Indianapolis and later with the Cincinnati Symphony, though he also did his share of teaching over the years. “Some men buy cars, but I went back to school. It was my way of staying connected.”

Carlson was also connected enough to know that he wanted to teach at a small college, and when he was hired by Albion in 2012, he knew it was the right opportunity for him.

Now in his sixth year at Albion, Carlson, who is called by his last name by most of his students, has made the study of accounting understandable and—dare it be said?—interesting.

“Anyone who takes [the tax class] is either an accounting major or a damn fool,” he said with a laugh.

In truth, he teaches in a fashion that brings clarity to what can be an eye-glazing subject to many. It, very likely, also led to his not only being promoted to associate professor and gaining tenure this year but receiving the prestigious Accounting Teaching Excellence Award from the Michigan Association of Certified Public Accountants. He will receive his award during an October 3 ceremony in Novi.

“It was a good year,” Carlson said. “I am deeply honored by the award. It’s kind of cool.”

What makes it especially noteworthy for him is that he was nominated by several of his students who appreciated not only the way he teaches but the significance of how he teaches.

Carlson teaches real-world accounting so that the subject is understandable and relevant.

“I try to find as many stories from my past as I can,” he said.

So he will head off into stories about the baseball fan who caught the historic 62nd home-run ball of St. Louis Cardinals slugger Mark McGwire in 1998 and his efforts to sell it and the taxes he faced.

“We talk about finding a treasure,” Carlson said of his teaching approach. “It makes it more understandable.”

Over the years he has also coordinated the College’s Accounting Society and the Volunteer Income Tax Assistance program (where E&M-trained students volunteer to help low-income local residents prepare their income tax returns).

Numbers are a family affair in the Carlson household since his wife, Kim, is also an accountant who did retire. They now live in Marshall but plan to build a home in Albion.

“We have two basic approaches,” he said. “My wife is a very detailed person. She chases pennies. I’m big-picture.”

Which leads to the most important question of all. Who does their taxes?