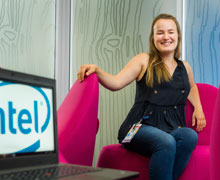 Laura Newbury, pictured in the lobby of Intel's external reporting unit in Portland, Oregon, is a senior majoring in economics and management with a minor in business and organizations. A member of the Prentiss M. Brown Honors Program, she is the daughter of Elizabeth and Keith Newbury of Harbor Springs, Michigan.

"It's a huge legal document with a lot of SEC regulations," says Laura Newbury, '18, of Intel's annual report. "I wasn't breaking them or going over the line, but sometimes nudging what we could do within those rules, such as asking, 'What can accounting do other than just numbers?'"

An intern who "nudges" SEC guidelines sounds like a supervisor's worst nightmare, but Newbury says her work was about best practice. Newbury spent the summer with Intel's external reporting headquarters in Portland, Oregon, following the company mandates to "rock the boat" and "change something."

Back to those SEC guidelines—they're a goal for many companies, Newbury says, but industry leader Intel is focused on innovation even in the historically arcane earnings report.

For example, Newbury cites the bullet list as a device that's more tired than useful. "It doesn't leave the reader with the desire to read more," she says. The 21st-century annual report, as she sees it, has to do more than simply show the numbers. Newbury researched reports issued by companies like GE, that include photos and visuals to underscore the significance of numbers that might otherwise lack context.

"You can implement a storyline through visuals and data," she says. "The annual report is a legal requirement, but it shouldn't be a missed opportunity to engage a reader. It's the not-technical aspect of a tech company."

Newbury got an exciting lesson on reporting, as part of the external reporting contingent that flew via corporate jet from Portland to company headquarters in Silicon Valley, for the release of the second-quarter earnings statement. "We were all in a room—external reporting, investor relations, legal, PR and the CFO’s chief of staff. They went back and forth on one point and ended up changing just two words, but those two words meant a lot—who knows, they might have affected the stock price," Newbury says. "Being clear and being accurate is huge and I saw that many departments work together to achieve this."

Once the change was made, Newbury was invited to "push the button" and publish the report to the company website. "It was a pretty exciting day," she says.

Newbury is now contemplating an offer from Intel to join their financial team full-time after she graduates. She plans to work in the tech industry as a financial analyst and potentially pursue a master’s degree in data science.

"I wanted to push myself and see if I was capable of moving across the country with no connections," Newbury says of her internship. "This experience has created more insights about what my future has to offer and the vast opportunities out there. I've grown to love the technology industry and the Pacific Northwest, and I believe that my future is just getting started there!"