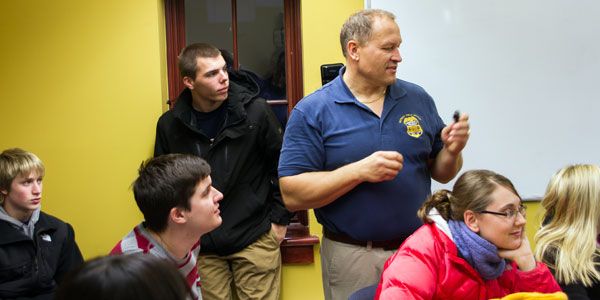 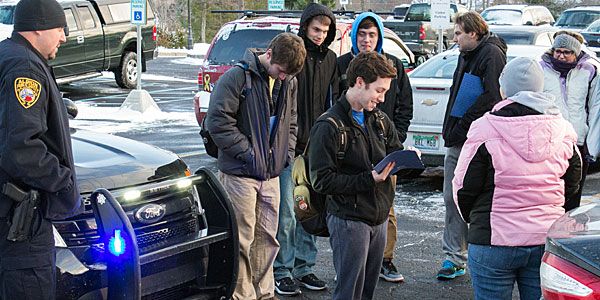 Students are called to the scene of an Albion Public Safety traffic stop, during which the officer saw evidence of an identity-theft operation in the car. 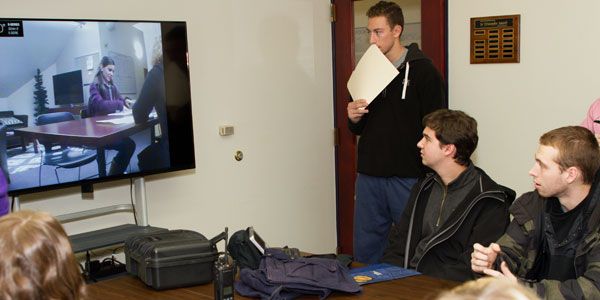 Albion students monitor an undercover operation of an abusive return preparer.
Next Slide

From responding to an Albion Public Safety traffic stop to putting a suspect in handcuffs, accounting students recently got a unique career perspective thanks to Albion alumnus Stephen Moore, '83, an IRS criminal investigation supervisory special agent in the Detroit field office. Assisted by several active IRS colleagues, Moore led the students through simulations of the real-life criminal investigations they pursue on a daily basis.

Electronic tax filing has created new opportunities for identity thieves, and Moore and his colleagues have made it one of their highest priorities to detect and prevent criminals from profiting from such schemes. “The crooks find ways to get your personal information, and then by claiming false business income, they file tax returns in your name, hoping to get money from the IRS,” explained Albion accounting professor John Carlson. "By the time you get around to filing, the thieves have collected the false refunds and are long gone."

Albion accounting student "agents" began with leads on a suspected identity-theft conspiracy scheme. The students conducted surveillance, interviewed witnesses and even searched garbage cans in order to gather sufficient evidence for court orders. Throughout the exercise, they were coached by Moore's team of IRS colleagues, several of whom are working closely with IRS undercover operations to expose criminals similar to those encountered by Albion's students.

"We were called by a police officer who found suspicious information during a traffic stop," said Lauren Epple, '15, of the surprise opening to the "investigation" given to her team. "We were responsible for talking to the woman about the found items. I didn't realize how hard it could be to get information from someone not willing to cooperate or the legal precautions that the IRS has to make. The woman was complaining and unhappy, but we had to continue talking until we gathered everything we needed. It was much more difficult than I would have imagined, and what we did was much easier than a real-life scenario."

Nick Emery, '15, went undercover, wearing a wire while gathering information from a possible suspect. "I acted as a potential client, which was quite nerve-racking. I had a fake alias I had to attend to and was asked multiple questions to erase any suspicion I was a cop," he recalled.

A New Spin on a Successful Exercise

Moore created the "Adrian Project" in 2002 as a way to expose accounting students to the work and career of IRS criminal investigators. Since its debut at Adrian College, the project has been used by IRS special agents across the country, to date involving some 6,000 participants ranging from high school students to college professors and professional CPAs.

The recent Albion exercise was Moore's first trial of a new simulation focused on identity theft. "Albion’s accounting students were the first to experience and critique it," Moore noted. "Their comments helped us to tweak and prepare the program for other colleges and universities throughout the country so that they can experience a day in the shoes of a special agent."

Throughout the exercise, students reviewed pertinent points of tax and criminal law through situational quizzing, as well as advice, from their IRS mentors. "What I found especially valuable was the real-world application of concepts defined in the classroom," said Alex Decker, '15. "It's sometimes easy to forget that academia and the rest of the world aren't as different as we might think. The lessons from this case study and the lessons in the classroom complemented each other very well."

At the end of it all, however, "My favorite part was raiding the tax firm and arresting the suspect," noted Jeffrey Irish, '15. "I came away with a greater appreciation of the work that these IRS special agents and other IRS agents do to keep crime down."