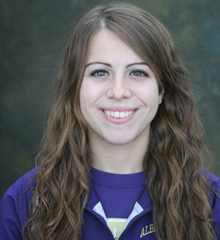 Theresa Hencsie is an accounting major at Albion College, but her activity off campus would put aside any stereotype of her being only involved in number-crunching and producing financial statements.

A sophomore from Troy, Hencsie enlisted in the Marine Corps Reserves during her senior year of high school.

“I was exposed to the Marine Corps through a significant other who was interested, so I sat in when they were talking with the recruiter,” Hencsie said. “It interested me because I’m driven toward challenges. The thought of proving myself and doing something few Americans do enticed me.”

Getting to Albion, however, proved to be a challenge. The training involved for her job as a water purification specialist was moved back, forcing her to abandon her plan of enrolling in spring 2012.

“I left for boot camp June 20, which was 10 days after I graduated from high school,” Hencsie said. “I enlisted in the Reserves so I could go to college and still get the experience of becoming a Marine. I looked into Albion. I came and visited, and I loved the campus and the atmosphere.

“I had it all planned out. Boot camp is three months. After that you graduate and go to Marine Combat Training, and that is one month, but when I graduated MCT a group had just started [job school for water purification] so I had to wait three months for the next group to pick up.”

While she loved the atmosphere on her campus visit, the opportunity to compete on the cross country and track and field teams sold Hencsie on becoming a Briton. In fact, Albion cross country coach Hayden Smith thought she had moved on after the job school delay, and he was pleasantly surprised when he found Hencsie’s name on the list of first-year students attending a student orientation session that summer. 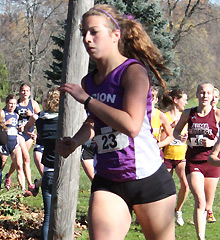 Commitments to the Marines and varsity athletics still forces Hencsie to look at the schedule. She trains with the Marines one weekend a month and for a two-week period during the summer.

“I love running and I love the Corps,” Hencsie said. “I had to miss the second meet this season because of a drill weekend, but the Reserves look to work with me. For instance, Nov. 2 is the Michigan Intercollegiate Athletic Association Championship and that’s a pretty big race, and I was able to tack that onto another drill weekend. The Marines try to work with my schedule.”

Thanks to the MIAA meet, Hencsie will train with the Marines the weekend of Nov. 10 as it celebrates its formation 238 years ago. That date also falls just ahead of the nation’s commemoration of Veterans Day.

“I look at Veterans Day as an opportunity to recognize everyone who has come before me,” Hencsie said. “I love talking with veterans and hearing their experiences. I haven’t been deployed overseas yet. I love hearing about all the places people have been and what they have gone through. I have the most respect for them. Being in the military gives me a connection – I understand what they go through.”

While scheduling may present a problem, Hencsie easily talks about how the discipline from the Corps translates to her running.

“I’ve been through situations [in the Corps] that have pushed me to the breaking point and past them,” Hencsie said. “I have that hard mentality that I can make it further than I think.

“The weather can mentally break a person down,” Hencsie added. “I went to boot camp in the summer in Paris Island, S.C., and it was grueling hot. I’ve always had that experience in the back of my mind. That experience helps me stick with something when I don’t know if I’m capable of finishing.”

Life in the Corps has taken Hencsie to some interesting places, including Yuma, Ariz., where she faced 115-degree conditions daily while supplying water on a joint mission with active Marines; Quantico Bay, Va., for an officer training leadership program; and Kodiak Island, Alaska, where she was part of a unit tasked with extending an airport runway to support the local economy.

Still, she will have a decision to make in a couple of years: whether to pursue an active-duty career in the military or move into the civilian workforce.

“I originally was leaning toward becoming an officer, but I’m more open to my opportunities,” Hencsie said. “Water purification plays more into chemistry than it does accounting. Being here at Albion, I’ve been exposed to business and I love it to the point where I could go in a different route than I had anticipated with the Marines.”