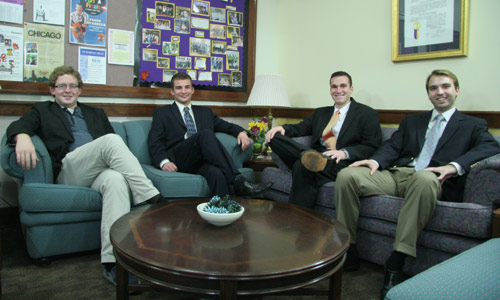 Rogers' collegiate experience found its direction when former Albion professor Kotaro Yoshida encouraged students in a Money and Banking class to participate on a team being formed to debate economic policies for a competition sponsored by the Federal Reserve. Albion’s team went on to win the regional competition in 2011, giving Rogers the opportunity to go to Washington, D.C., to meet Federal Reserve Chairman Ben Bernanke and present in front of a panel which included a governor of the Federal Reserve.

Now in his junior year, Rogers continues to seize every opportunity to compete. He developed the policy stances presented by an Albion team, coached by economics and management professor John Carlson, that has reached the final round in a competition sponsored by the American Institute of Certified Public Accountants (AICPA). He's also back as the Britons defend their regional championship in the Federal Reserve Challenge.

"I got involved in both competitions by chance," he said. "I was a sophomore in the Money and Banking class, which is a little early – most students don’t take it until their junior or senior year – but Kotaro Yoshida encouraged me to come out and see how it felt. [The opportunities] all happened because I put myself out there. That's the way you get involved in things that take you places. It's the things you least expect that will take you the farthest."

While he says he reads about economic policy any time he’s awake, Rogers is quick to credit the economics and management faculty and staff for the countless hours of support they provide to students like him.

"I read policy from the time I wake up when I check the blogs of economists at different schools, like Greg Mankiw and Paul Krugman, until I go to bed," Rogers said. "The only time I don't [read policy] is during class. I’m either skimming through something or just scribbling away to figure out the math in their models.

"The level of commitment and passion the professors bring here is unreal," he added. "The economics professors – Jon Hooks and Bojan Ilievski – and the entire department have been so good to me in terms of the time they put in after class. The competitions are not classes being taught for credit – it is all voluntary. It is a team effort on their part to move us forward. In terms of economics, I learned more from the Fed Challenge than I will learn from any other class at Albion – bar none."

The AICPA competition charged teams with solving some of the most pressing financial issues facing the United States – the deficit, income taxes, and Social Security. Rogers described the Fed Challenge, which emphasizes research and data analysis, as more like a graduate school seminar.

"The Fed Challenge takes an extraordinary amount of effort to stay informed about the new data coming out," said Rogers (pictured at right). "The Fed and the federal government employ thousands of economists. We’re five undergraduates who don’t have the requisite training to do what they do. There are no books. It is a lot of math-intensive work, and the professors help break it down for us."

The depth of knowledge Rogers has gained is already paying off in the form of an internship with an investment bank near his hometown of Rochester, Mich.

"I think I got the internship because I could talk about more than just firm-level, specific case studies," Rogers said. "I could talk about broad concepts like what monetary policy does to firms – things that are abstract, harder to measure and not easily taught in a work environment.

"My education here has given me a broad and useful foundation to achieve different things," he added. "I could go into academic economics as a Ph.D. candidate, but my most likely path will be to pursue an M.B.A. somewhere, and I could always go into the investment banking world. My biggest thing is at Albion you get what you put in. I've reaped the most reward from the things I’ve put the most effort into."