For a Build Albion Fellow, Service Extends to Sister Cities 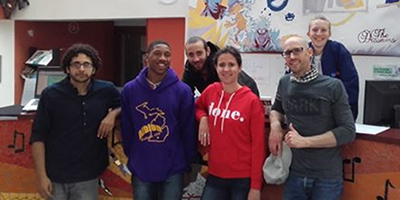 Chris Bell, ’20 (second from left), with his colleagues during his internship in Albion’s Sister City of Noisy-le-Roi, France. A communication studies major, Bell has been an Admission Office tour guide for three years, performed in the Theatre Department’s 2018 production of Topdog/Underdog, and ran for the men’s cross country team in 2017.In addition to his studies, Chris Bell, ’20, gives back to the Albion community as part of the College’s Build Albion Fellows Program. Little did he know that he also would have a month-long opportunity this year to give back to Albion’s sister cities, Noisy-le-Roi and Bailly, France.

The fact that he didn’t speak or read French did not stop Bell from jumping right in when he arrived in France in May. First assigned to the youth center in Bailly, Bell not only met French students and made connections with them, he also was assigned to help them understand English.

“I was also a helpful asset to everyone who spoke French but could also speak and understand English quite well,” he said. “So, not only was I learning French from them, I was doing a little bit of teaching English words, concepts and phrases to them.”

Another part of the internship concerned social media. Bell was tasked with updating the youth center’s Facebook page with photos, videos and just about anything else visually to promote the facility.

“Every day I tried to take pictures, and over the course of my stay I was able to get them everything they needed for their social media page,” he said.

That wasn’t Bell’s only work experience. He also rotated between the city halls of Bailly and Noisy-le-Roi, photographing from a different perspective parts of Bailly that the city was going to use in an annual town flower competition and in a local magazine.

Another stop for Bell was the Université de Versailles St-Quentin-en-Yvelines (UVSQ), where he used Adobe Photoshop for the first time to help them make cards for a party through the school.

Paired with his work assignments, Bell stayed with two different host families who helped him navigate his surroundings and made him feel at home.

“I thought this was a great experience and I had a lot of fun meeting everyone there,” he said. “The most important thing I learned was that there is so much more I can do with my life every single day instead of sitting around wasting time and waiting for things to happen. Everywhere I went I learned something.”