The stories are heartbreaking. They are unsettling and sad and shocking, and there are times, Bethany Mutter admits, when they leave her emotionally wrung out.

There is the woman who discovered she had Stage 4 lymphoma while 30 weeks pregnant. There is the woman who was kidnapped and assaulted by her father. There was the parent who still hasn’t recovered from the loss of a child. There are stories of homelessness, death, rape, divorce, illness and lives destroyed. It is a shattering litany that shows the worst of human nature but, then again, it also demonstrates the best of human beings and what they can endure. 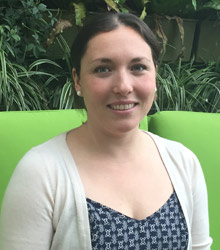 Bethany Mutter, visiting assistant professor of communication studies, received her bachelor's degree in 2007 from Stetson University, her master's degree in 2010 from Florida Atlantic University and her Ph.D. in 2014 from the University of Denver.

“It’s difficult to process,” said Mutter (right), a visiting assistant professor of communication studies who has been conducting a survey since November on how people cope with difficult experiences in their lives. “It’s heart-wrenching. I read their stories and it’s tough. They’ve shared their deepest and darkest experiences from their lives.”

And, as she has read the more than 200 responses she’s received to her anonymous online survey request, she admits it hasn’t been easy.

“There’s just been a range of experiences,” she said. “There’s more than I expected. It’s difficult to process.”

Mutter admits she’s always been drawn to studying what she calls “the dark side of close relationships.”

“Life experiences aren’t all rainbows and sunshine,” she said, adding that her interest lies in how people make the best of a bad situation. “One of my favorite quotes is written in a dark-side-of close-relationships book. Bill Cupach and Brian Spitzberg (dark side scholars) claim that the paradoxes and challenges of life are that relationships can be both so beneficial and so hurtful to us. The dark and bright side are intertwined. Their juxtaposition undoubtedly adds to the stimulation we experience. By better understanding darkness, we hope it will be possible to avoid some types of darkness and more fully derive the good from the pain.”

That’s what led Mutter to create her survey, titled “Coping with Difficult Experiences.” Through it, she could look at the tribulations people endure and, more important, how they have moved on (or tried to move on) from them.

“I wanted to paint a broad stroke,” she said. “I wanted to know how people cope with difficult experiences in their lives. It’s fascinating to me, how people find the silver lining in dark clouds.”

The survey, which Mutter closed down at the end of the spring semester, consists of a series of questions in which respondents are asked to provide answers through a range of choices, from “I agree a lot” all the way to “I disagree a lot.”

The questions are broken into categories that focus loosely on life expectations, to the handling of stress, to dealing with problems.

The survey also asks respondents to talk about the most difficult experience in their lives and how they have dealt with it.

And while Mutter says it might take years to collate and analyze her research, she is already seeing some interesting results.

“I’m finding men are more resilient than women,” she said. “Women tend to be more hurt and distressed by difficult experiences like bullying. So I’m looking to see if women have to shoulder more of the weight and responsibility. For example, are they having to deal with more because they’re raising a family and working?”

Indeed, Mutter has learned that some people have been unable to fully recover from the trauma in their lives, while others have not only battled back but flourished.

She spoke of one woman who as a child was molested by her father.

“But she said that helped shape her into who she is,” Mutter said. “Now she’s helping kids.”

Mutter admits she was surprised by the depth and reaction to her survey. She hopes to present her results at conferences and, perhaps, write a book about her work. She said some people who participated are already looking forward to seeing the results.

“I’m just so lucky people feel comfortable enough to talk about their experiences,” she said. “I just hope my survey gave them an opportunity to be heard.”