On the third floor of Putnam Hall, amid the empty labs and deserted classrooms that are a byproduct of a campus on summer break, chemistry professor Craig Streu, '04, and his band of student researchers continue working with the light in their battle against the dark. 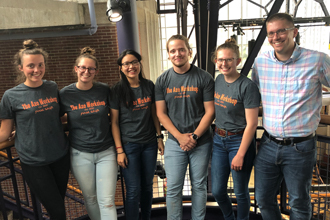 It is that and more. It is the continuation of a project that took root in his mind when he was a postdoctoral fellow at the University of Pennsylvania, continued to his days as a chemistry professor at St. Mary’s College in Maryland, and has reached a new level in his four years at Albion.

It is called photoswitch therapy, a subset of a growing field known as photopharmacology, which uses light to activate and deactivate drugs. Streu and his students are on the cutting edge of developing light-responsive chemotherapy to battle different types of diseases, from arthritis to Alzheimer’s disease to perhaps the biggest obstacle of all—cancer.

Streu has recruited students with an interest in chemistry and research each year since coming to Albion. His goal is to offer valuable research opportunities as well as to create a new weapon in the battle against cancer which, one day, could be as easy as inserting a tiny light-emitting diode (LED) into the body and focusing it on a tumor.

Results have shown that the light waves, in combination with an otherwise innocuous drug, could destroy the tumor without the widespread physical damage that comes from other types of chemotherapy and radiation.

This summer, five students, all of whom have spent at least a year working with Streu on the project, are using this research as their Foundation for Undergraduate Research, Scholarship and Creative Activity (FURSCA) project.

Marah Ranger, '20; Shelby Stajdl, '20; San Pham, '21; Clara Wagner, '21; and Noah Robertson, '21 make up what they’ve nicknamed “Camp Azo” (Azo is a compound that changes shape), and they’ve understood from the moment they started that they’re doing something that has far-reaching effects. Robertson, Pham and Wagner are biochemistry majors; Stajdl is a biology major; and Ranger is a religious studies major. All plan in some fashion to pursue the research work they’ve developed at Albion.

“I never thought I’d go into research, but I fell in love with it,” Ranger says. “Now it’s completely changed where I want to go in the future.”

“It was a way to learn a lot about a topic I hadn’t thought much about, and now I have a love of research,” Wagner adds.

“I started working in a lab to get some meaningful experience,” Robertson says. “Now it’s developed into something more important. It’s cool to say I’ve contributed to the growing pool of cancer research.”

The students' work is time-consuming and progress can be agonizingly slow. But they also understand what successful results can entail as each student works with select cancer molecules to find new ways of attacking the disease.

Pham, for example, is working on stopping the growth of blood vessels in solid tumors, while Robertson focuses on generating drugs to prompt the body’s immune system to recognize and fight cancerous cells.

“It used to be that tumors were treated based largely on their organ of origin,” Streu explains. “But there are hundreds of mutations that can lead to tumor growth, and it’s really an exciting time because gene-sequencing technologies now allow us to use personalized treatments for many unique types of cancer, which is much more effective.”

And the Streu group is making these treatments less toxic to the surrounding tissue.

Indeed it was just three years ago when Streu spoke about his first promising drug candidate, one whose potential has opened the door for new and innovative research in the field.

“While research continues on that molecule, we’ve also moved to different targets, which are also showing exciting results,” Streu says. “It’s a big field and there’s a lot of fertile territory.”

Streu and his researchers haven’t unlocked all the secrets in the seemingly endless war against cancer, but the results are intriguing and they continue to entice.

“The last six months we’ve gotten further than I thought we would,” Streu says. “It’s super promising. There’s not going to be one cure for cancer, but this is one of the weapons in the arsenal.”