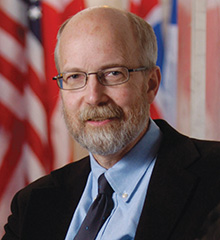 Kim Tunnicliff started his career at Albion College in 1984 when he became a faculty member in the Political Science Department. As director of the then-named Gerald R. Ford Institute for Public Service from 1985 to 1999, he placed a special emphasis on developing experiential and international educational experiences for college students. He was highly regarded by his academic colleagues both at Albion and beyond.

Kim's passionate belief in public service brought the level of opportunities for Ford students to new heights that have carried them forward to leadership positions all over the globe. This endowment was established by his family, former students, colleagues, and friends to celebrate his life and the widespread and enduring impact of his legacy at Albion College.

David Utrata is a member of the Ford Institute and the Center for Sustainability and the Environment. As Albion College's first-ever Kim Tunnicliff Fellow, David Utrata spent a semester in Stellenbosch, South Africa. The CIEE Stellenbosch Sustainability and Community study abroad program engages students in a variety of sustainability-related issues that impact present-day South Africa. David will deliver a public presentation on campus summarizing his research in Spring 2015.