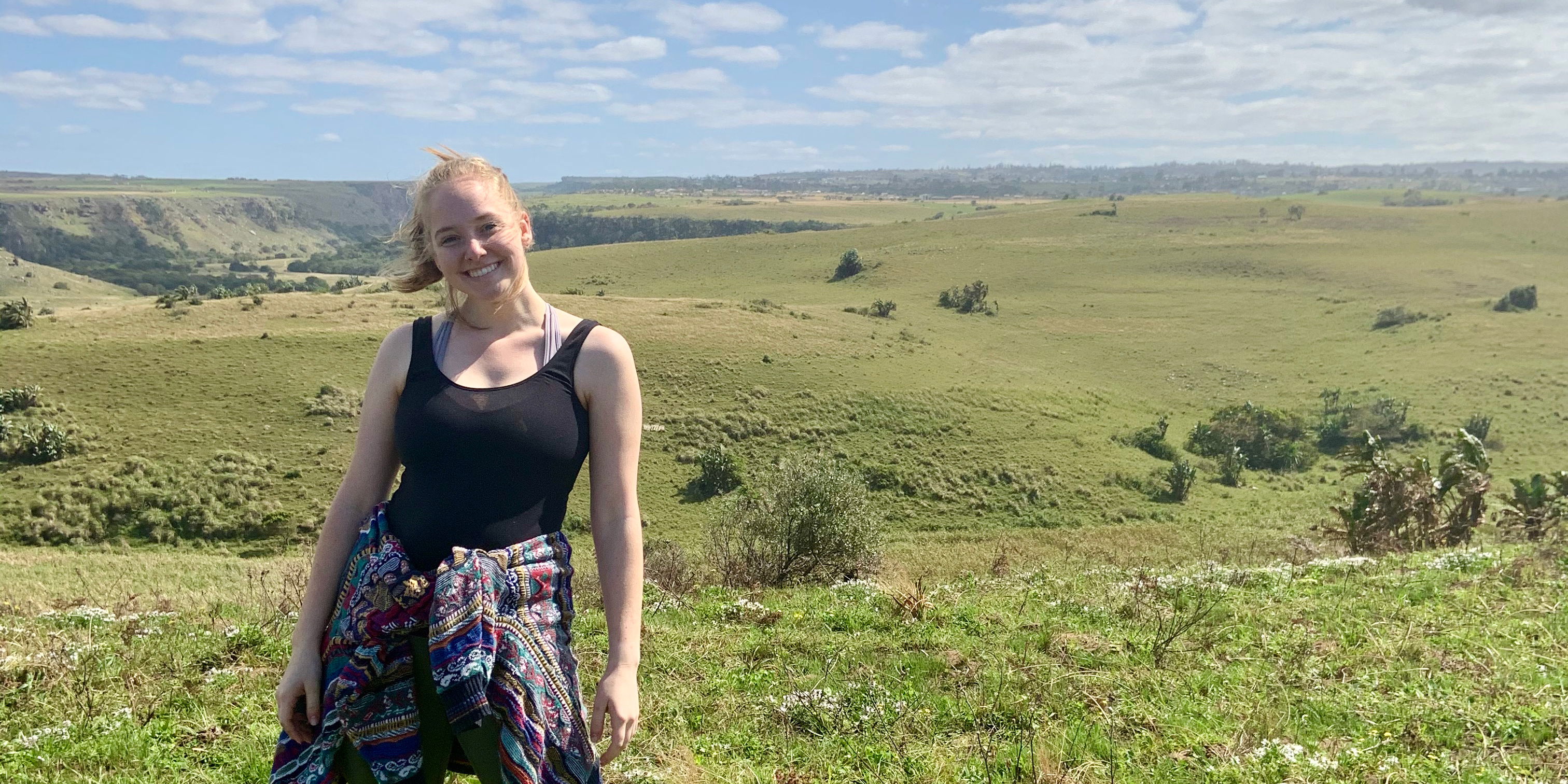 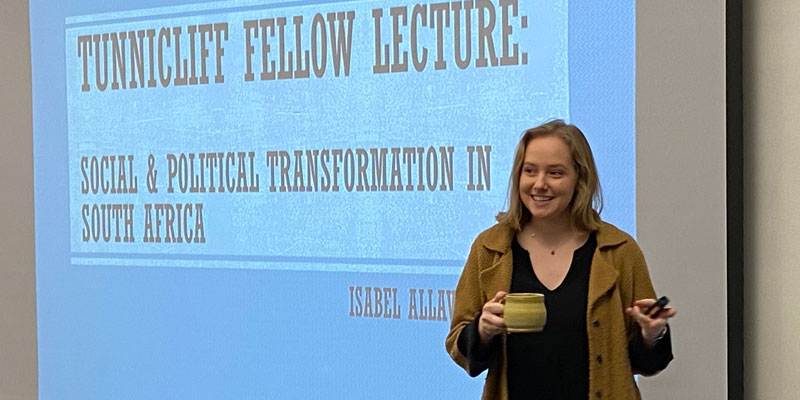 Isabel Allaway, '20, gave Albion's Kim Tunnicliff Fellowship Lecture in February as the 2019 recipient of this scholarship for international study. Allaway spent the fall 2019 semester in Durban, South Africa, examining South Africans' perceptions of voting and protest and their impact on societal change. Allaway is a senior majoring in sociology with two concentrations: one in the Gerald R. Ford Institute for Leadership in Public Policy and Service, the other in law, justice and society. She also is a member of the Prentiss M. Brown Honors Program. Allaway is the child of Julianne and Ben Allaway; she is from Des Moines, Iowa, and a graduate of Theodore Roosevelt High School.

I chose to go to South Africa in part because I didn’t want to go somewhere “easy”—another campus inside a different version of a college bubble or a European country where I wouldn’t be challenged to examine my race, privilege, and implicit biases. And since I’m passionate about studying policy, systematic injustice, and racism, South Africa’s history of apartheid and the changes that have and haven't happened since 1994 were something I wanted to examine.

While I worked hard on the coursework and research that were the focus of my program, a lot of what I learned this past semester centered around the experience of navigating a new culture, and that learning was also often challenging. Being abroad and truly immersing myself meant pushing myself to do things outside my comfort zone. This meant embracing different changes, like giving up my vegetarian diet.

Since I was living in host families and food is such an important part of Zulu community, I wasn’t going to let my diet get in the way of my ability to bond with my host family and experience a new culture through meals. This was difficult at times because I haven’t eaten red meat in a long time, and did learn I truly feel better when I don't eat meat at all. However, it was worth it, and I grew a greater appreciation for my ability to make the choices about my diet that I can make back home.

I learned that our “first-world problems” really are trivial. After my eye-opening experience in one of my home stays in a rural farming community, I found myself thinking a lot about all the things back home people complain about. I saw myself, my family, my friends in those small fits of privileged frustration, and I felt sick. In those moments, there are people in the world whose primary, daily concerns are simply the safety and well-being of themselves and the people they love. It makes me wonder: when did that stop being enough for us?

I expected to want to downplay my American identity while I was in South Africa. I pictured myself doing this to avoid stereotypes or dissociate myself with a country that doesn’t have a great reputation for treating developing countries well. However, being mistaken for a white, Afrikaans South African—the people who built and benefitted from apartheid—felt like a worse possibility. That was surprising, but it demonstrates how present the impact of institutional racism still is in the country, how real it is.

Examining my own identity and privilege was a key part of being a good guest and being an approachable researcher. People were often shocked to hear me talk about privilege—once that happened, people opened up to me in a different, deeper way. It established trust. Many people told me that white people, in their experience, think the issue of racism isn’t a problem anymore because apartheid is over and those white people don’t invest enough energy in standing against it today. I agree with that perception of white people in South Africa. I also think that about a lot of white people in the U.S.

I was often the only white person in public spaces and private ones, and I think it’s really important for all white people to experience being a minority in that way. We aren’t used to it, and so we don’t think about how our norms dominate spaces or how we could be more mindful of that reality. Sometimes I felt really out of place and uncomfortable, but I knew getting comfortable being uncomfortable was a vital part of my efforts to live as a better ally and unpack my own implicit biases.

Reflecting about my experience brings me back to the Zulu word “Ubuntu,” which is written into South Africa’s Constitution. It means: “I am because you are.” To me, it is a reminder to pay attention to the humanity of other people when society may encourage you to do otherwise. As I’m moving forward in my career and trying to implement what I learned in South Africa into my life, I want to do so by infusing the idea of Ubuntu into the work I do on myself and for the world around me.

Kim Tunnicliff started his career at Albion College in 1984 when he became a faculty member in the Political Science Department. As director of the then-named Gerald R. Ford Institute for Public Service from 1985 to 1999, he placed a special emphasis on developing experiential and international educational experiences for college students. He was highly regarded by his academic colleagues both at Albion and beyond.

Kim's passionate belief in public service brought the level of opportunities for Ford students to new heights that have carried them forward to leadership positions all over the globe. This endowment was established by his family, former students, colleagues, and friends to celebrate his life and the widespread and enduring impact of his legacy at Albion College.