Are there any two topics that bring Americans together and drive them apart these days more than elections and immigration?

Peter Hart and Angela Maria Kelley sought to find out as they brought their messages and expertise to Albion College during a two-week span in March as part of Albion College's Visiting Scholars series. 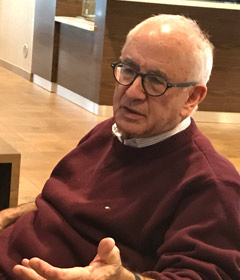 Peter Hart, a nationally renowned pollster, spoke with Albion students in mid-March about public opinion and polls as part of the Albion College Visiting Scholars series.

Hart founded the Washington, D.C.-based Peter D. Hart Research Associates in 1971 and has worked with the renowned NBC News/Wall Street Journal poll since 1989. He has chronicled elections since 1964.

Both were on campus in back-to-back weeks speaking to various classes on topics as wide-ranging as “Introduction to American Democracy” to the “ABCs of Immigration: How Our System Works and Doesn’t.”

Not an Exact Science

Hart’s two days at Albion were capped with a public lecture at the Ludington Center, entitled “The Future of Polling and the 2020 Presidential Election.”

It’s a topic Hart, and every other pollster, has been bombarded with since Donald Trump’s stunning victory over Hillary Clinton in 2016—a result few polls predicted.

For Hart, that election still generates a bemused shake of the head. But he notes accurately that leading up to the election, every pollster had Clinton leading by between two and four percentage points in the popular vote, which Clinton ultimately won by two points.

“Our poll had Donald Trump down by four points,” Hart recalled. “But we only measure the popular vote, not the Electoral College vote.”

But he admits the final result was a shocker.

“Why was I embarrassed?” he said. “We should have figured it out analytically.”

But for Hart, one of the nation’s most respected pollsters who has seen the business change in ways few could have imagined, those missteps are what make the job so interesting.

“The biggest challenge to polling,” he said, “is the consumer of polling.”

And his message to Albion students is to stay engaged and make decisions that matter to you.

"I can tell you that Joe Biden will be the [Democratic Party] favorite in 2020 because he’s so well known,” Hart said. “Does it mean anything? Absolutely not. Bernie Sanders was nowhere at this point in 2016. Name me one person who led from the beginning.”

He also said that even though polling has changed dramatically over the years, one fact has not.

“Polls are a reflection of where people are at,” he said. “Now, in 2020, will people be voting just to defeat Donald Trump? Not really. They will look at someone who is closer to my values. Do they share my values?"

“In the end it’s always about what voters care about,” he said.

Kelley was the guest lecturer for the David H. Aldrich Memorial Lecture on March 26, and it was a message that many wanted to hear, as a crowd of more than 60 people attended her talk at the Bobbitt Visual Arts Center auditorium. 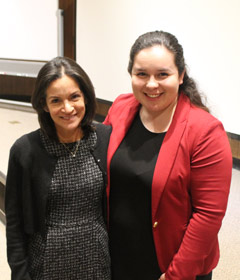 Kelley has spent more than 20 years analyzing the often turbulent world of the policies and politics of immigration, admitting the dynamics continue to challenge and frustrate her.

“My message is that immigration is an issue that conjures up a lot of feelings but not a lot of facts,” Kelley said.

The subject, always contentious in America, has been ratcheted up in the Trump administration.

“I’ve never experienced the level of vitriol that I’ve witnessed since Trump’s election,” she said. “This is a conversation about our national identity.”

The daughter of a mother from Bolivia and a Colombian father, she was born in America and after her parents divorced, her mother remarried and changed the family name from Caicedo to Kelley.

“That says it all in terms of my mother’s intentions,” Kelley said. “She wanted us to be full-fledged Americans. I have a calling to help. My own immigrant situation grounded me on what is good and what is right.”

And Kelley has become a passionate immigration advocate ever since. Earning her law degree at George Washington University, she went on to work as a legal services attorney representing low-income immigrants. She would also work for the Center for American Progress as a senior vice president as well as VP for immigration policy.

She understands all too well that issues, including undocumented workers and Deferred Action for Childhood Arrivals (DACA), are topics that need a “sober” discussion. And she spent two days at Albion delivering that message.

“These are issues that need to be raised,” she said. “But in the current climate it creates a distraction rather than a discussion.”

And while she admits there are times her cause often feels like a case of taking one step forward and two steps back, she remains convinced the complex issue of immigration can be solved.

“I’m an optimist,” she said. “I think there are very few people I’ve met, if given time and space, who wouldn’t want to have people of diversity as their neighbors. We can build a country that’s inclusive.”

Patrick McLean, director of Albion’s Gerald R. Ford Institute for Leadership in Public Policy and Service (which sponsored both visits from participants in The Council of Independent Colleges' Woodrow Wilson Visiting Fellows program), believes these are subjects that need to be discussed and debated.

“Peter and Angela each spending a week in Albion has afforded our students an exceptional opportunity to learn about public opinion and immigration from the best in the business," he said. "Having our visiting scholars with us for a week allowed students to really get to know them, their backgrounds and their scholarship. This has been one more example of student learning occurring well beyond the classroom."