Of course, we should all pick up trash, recycle paper and conserve electricity. But environmental activists know that real change lies in the hands of politicians, policymakers and the people who elect, educate and support them. Here, three Ford Institute students share unique views of environmental policy action in Michigan, via three very different summer experiences.

“If you aren’t committed to the cause, you absolutely would not be able to do this work.”
–Nora Gaffney, ’20, Michigan League of Conservation Voters 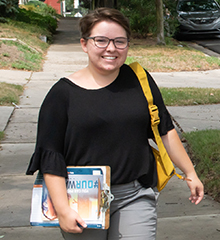 Nora Gaffney, ’20, in Grand RapidsLong heat waves kept many Michiganders indoors this summer, but Michigan League of Conservation Voters intern Nora Gaffney was not among them. “It is challenging to knock on hundreds of doors in a day, and if you aren't committed to the cause you absolutely would not be able to do this work,” Gaffney says. “I'm out in the heat to talk to residents of Grand Rapids about environmental issues and voting in this election season because we need change in Michigan, and that means there has to be people giving the time on the ground.”

Gaffney’s internship focused on volunteer recruitment and training, with the goal of encouraging voter participation as a way to support environmental issues in West Michigan. One especially satisfying task was matching diverse volunteers with equally diverse tasks. “Everyone is unique and has a different experience and skill set to bring,” Gaffney reflects. “Some volunteers that I work with would never want to canvass or phone-bank, but are great writers and have written beautiful letters to the editor about environmental issues. I've really enjoyed helping people use their strengths to help other people.”

And, of course, Gaffney’s involvement with the League has led to a greater appreciation for the work of political nonprofits. “I've learned that having clean tap water in Michigan is not something all residents can expect. Legacy pollutants and new pollutants like PFAS have changed the lives of millions of people and families. There are people who have cancer and have died because of legacy pollutants in their water. This is something we can't be OK with, and without this internship I wouldn't even know about all the water issues affecting Michigan residents.”

Gaffney concludes: ”I’ve also learned that speaking out and organizing people is crucial. Without nonprofits and citizens gathering together to speak out about injustices, things would never change.”

“Public service can be exhausting … but in many instances, it is so cool to see how passionate people can be.”
–Elle Jansen, ’19, Detroit RiverFront Conservancy 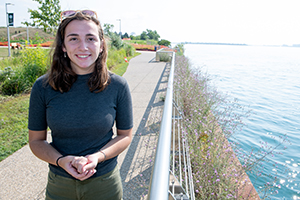 Elle Jansen, ’19, in Detroit“There is a lot of office work, but I also spend a significant amount of time out on the riverfront, doing event setup, or assisting in programming,” says Elle Jansen about her internship with the Detroit RiverFront Conservancy. “It is very refreshing and especially unique because I am able to enjoy the outdoors in such an urban setting.”

Jansen’s far from alone in her enjoyment of the river and the environmental restoration that has been central to the city’s renaissance. The Conservancy oversees the long-range goal of creating a plan to develop a five-mile stretch of river that protects the natural environment while simultaneously accommodating the three million joggers, tourists, festival-goers, lunch-eaters and others who visit the riverfront each year.

“I love that our programming attracts different types of people,” says Jansen, whose internship involved everything from event registration and promotion to creating signage and directing volunteers. “The coolest part is interacting with so many types of people. Whether it be small children at a reading program or seniors at a weekly river walk, or someone from Detroit or someone from Germany, there are always different people that come to enjoy and appreciate the riverfront.”

Jansen also gained insights about how nonprofits respond to community input. “I like going to community meetings and hearing people's questions, concerns and comments about the riverfront and its future developments,” she says. “Public service can be exhausting because people always have something to complain about (especially when it comes to things happening in their backyard). But in many instances, it is so cool to see how passionate people can be about public space and specifically Detroit as a whole.

“This exemplifies what it means to be in public service,” Jansen adds. “Listening and adhering to community needs is absolutely essential—and it is something I really like being a part of.” 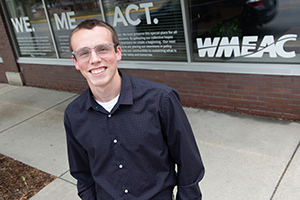 Beau Brockett, ’19, in Grand RapidsComing to Albion for college was a big step for Beau Brockett—at least in terms of community size. “Albion was the biggest place I’d ever lived until this summer,” says the Richmond resident, who has spent the past three months in Grand Rapids as the West Michigan Environmental Action Council’s journalism intern. “But it’s neat. There’s always something happening in Grand Rapids.”

And if that “something” impacts the environment, Brockett may have covered it via his work on the Council's blog. From an innovative utility-based loan program in Holland to street drainage improvements, a candidates’ forum and local efforts to reduce plastic straw usage, Brockett supports the organization's mission to educate West Michigan on a large number of issues.

He’s discovered a great enthusiasm for the reports, studies and legislative documents that most people find incomprehensible.

“I've found that I'm a bit of a policy wonk. I enjoy finding out how environmental change comes about from local policy and how it’s implemented,” says Brockett. “This internship has helped me learn to translate the jargon of policy to understandable, enjoyable and relevant content to my readers.”

For instance, Brockett reported on a change in Michigan law that now allows municipal utilities to offer loans to its customers. “The laws were filled with energy and environmental jargon, and it was my job to show how important each law was,” Brockett says.

“Now, if municipal utility users want to better insulate their home, buy energy-efficient windows or install solar panels, some communities offer a low-interest loan that's tacked onto their electric bill,” he explains. “I first had to understand the law itself, and then I could share it in a way that a general audience could understand.”