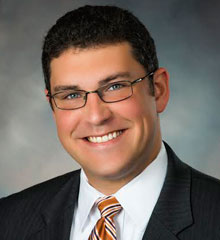 Our trip to Washington DC, visiting lobbyist offices, AmeriCorps, and the Capitol.

Keep connections with Albion alumni, both contemporaneous, past and future. Opportunities can arise from just that one connection, and the name on the degree holds some weight, even as far as the East Coast.

The teaching style at Albion and the Ford Institute forged critical thinking and problem solving skills which relate well to my role as a civil litigation attorney.

The outlook for attorney jobs is a difficult question to answer, as it differs with each location and field. There may be more opportunity in firms in smaller towns than with bigger firms. Since about 2008, big firms hiring has been drastically different than it previously was.

I interned at Senator Stabenow's office in Washington DC. It was thoroughly enjoyable. I helped in researching for policy initiatives, had contact with constituents, attended committee hearings, and met many influential and powerful people in government. A particularly memorable moment was when there was an "unidentified package" located in the Dirksen Senate Office Building, and the entire compound had to evacuate. While somewhat frightening, it is most memorable to me as I had to carry five visitors' bags with us, as they were at that time on a tour of the Capitol and had stashed their belongings in the office. Such is the life of an intern. I made many connections I still am in contact with today, and it directly led to my job with the campaign in 2006 after graduating from Albion.